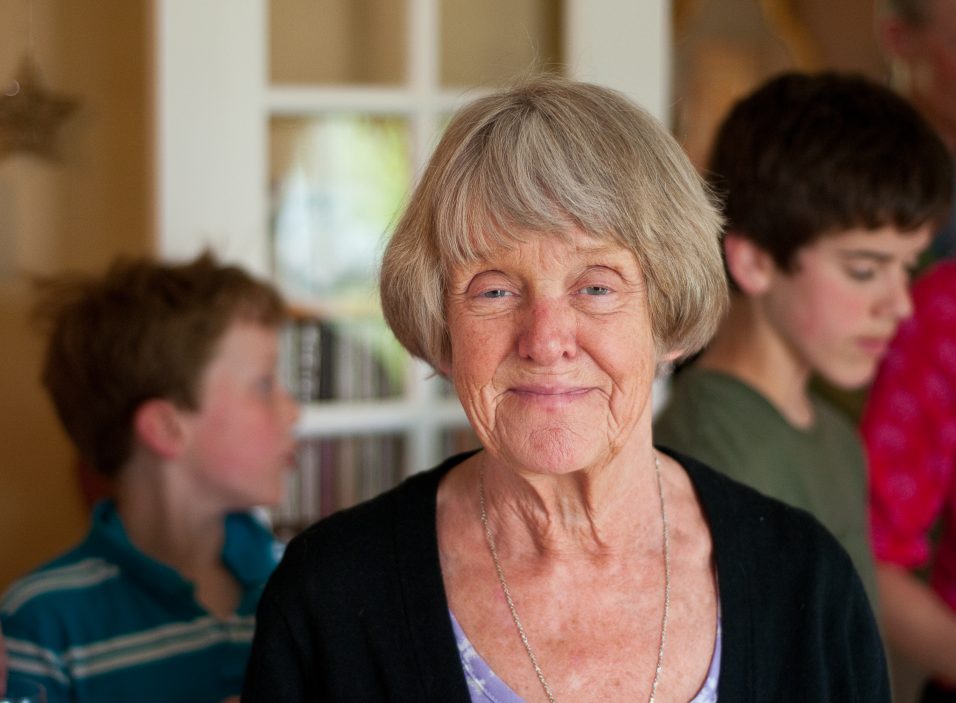 Have you ever had that moment where you’ve seen a face for years, interacted with that face, and felt like you knew that person, but actually could not make the connection when that person and you shared a half a dozen emails because you never knew their name? It wasn’t until Diana Shelley sent me her photo for this profile that the light bulb in my little brain came on and EUREKA, I made the connection of DIANA being the lady I’ve served coffee too (small coffee in the square bottom cup) for over two years now. I am so pleased to tell you all about this wonderful community member.

Diana Shelley was born in London England and educated at a private girl’s school (for several years following the end of the war as a “boarder”) in hometown Guildford, and then went on to secretarial college to learn shorthand, typing etc. She immigrated to Toronto in 1960 where she subsequently met her future husband, also born in England, who came to Canada at age 12. Following their marriage and her husband’s graduation from the University of Toronto, Diana’s husband joined the civil service and was posted by the Canadian Government as a Foreign Service Officer and they were whisked back to London for three years. In 1968, when her husband was appointed (in absentia!) as the Registrar of Acadia, they moved back to Wolfville with two very small children. Diana and her husband went on to have three more in the EKM Hospital!

That’s the bare facts of Diana’s early years (as she says “there’s lots of years to cover”). Diana is now retired. She states, “I was a stay-at-home mother to my five children until the youngest was well into elementary school. Then I started with a variety of secretarial jobs, mostly in medical offices in town. I had worked as a physiotherapy clinic manager in the UK before I immigrated to Canada. By strange coincidence, I ended up as office manager of the Valley Physiotherapy Clinic, Wolfville branch, when it first opened in 1988. I worked there for 16 years until retirement.
I loved my work but there was nothing really special about it other than that my colleagues were wonderful and that it was always dealing with people.”

Diana, like so many others in our great community, has always loved being involved in volunteer activities – including everything from the early days of WAICC (Wolfville Area Inter Church Council) with the “Dorcas Shop”, Inter-Church Housing, etc; to palliative care visiting with VON; and church-related activities such as Sunday School teaching, visiting, and choir. Other activities included establishing and helping run the first Beaver Scouts pack in town, early attempts at establishing Meals on Wheels in the town, and, much more recently, being involved in establishing the Wolfville Area Food Bank. The Food Bank (now 10 years old) has become one of Diana’s major volunteer activities in more recent years. Diana was Chair for three years and recently, after a break from the position, has become the current co-chair. She is also very involved in the “Special Needs” programme of WAICC.

Based on all her amazing volunteer contributions to our community, Diana, nominated by a friend and fellow Food Bank volunteer, was recently awarded the Sovereign’s Medal for Volunteers which was created by the Governor General of Canada. This award was fashioned this year and recognizes volunteers who have made a significant, sustained, unpaid contribution to their community, in Canada, or abroad. The Governor General said of the award, “I have the pleasure of recognizing individuals who care about the well-being of others and who share a desire to make our communities kinder and healthier places in which to live. The Sovereign’s Medal for Volunteers will celebrate the achievements of these Canadians and emphasize our country’s commitment to giving.”

Diana goes to Moncton on June 12 for the formal presentation by the Governor General, His Excellency the Right Honourable David Johnston. And on behalf of the Town of Wolfville and myself, I’d like to extend congratulations to Diana and thank her very much for all her contributions.

With all this on her plate Diana still makes time for her four animals (Two dogs and two cats), and she’s been an avid gardener for as long as she can remember. On living in this beautiful area, Diana states, “I can’t say enough to describe how glowingly I feel about Nova Scotia, the Annapolis Valley and, above all, Wolfville. Despite all the economic problems of this province, I wouldn’t live anywhere else. The town of Wolfville is perfect – a blend of small town NS with all the wonderful assets and amenities which Acadia University brings and all this surrounded by the most magnificent countryside. It is close to the lovely city of Halifax and close to the airport in case one wants to take a temporary leave of absence. The people here are kind and caring. The Food Bank, and the people who work in it, are an example of this caring spirit.”
With no signs of stopping, Diana plans to continue her volunteer duties, tend to her fur babies and her family (near and far), and enjoy everything Wolfville can offer her. I applaud Diana’s efforts, am inspired to find ways to help out, and am confirmed in my belief by her that Wolfville is occupied by some of the most wonderful people in Canada! Thank You Diana!