Nova Scotian hospitality: Supper at the kitchen table, the company of friends and family, a cozy place to spend the night. It’s no secret that we excel at welcoming our guests. While plenty of tourists make their way here for pleasure, there’s also a steady stream of Nova Scotians regularly travelling across the province each year to access medical services. Fidelis House is making those trips more comfortable and affordable for patients of the Valley Regional Hospital.

Visiting a hospital can mean a stay far from friends and family, and the comforts of home. For those seeking outpatient care, the long-distance travel is difficult. For visiting friends and family, the options for accommodations are costly and limited. Added to illness, these extra burdens pile up. Situated on the grounds of the hospital in Kentville, Fidelis House has been offering a welcoming ‘home away from home’ for patients and their loved ones since 1992. Staffed around the clock by dedicated volunteers, and funded through donations, guests only contribute $20 a night towards their stay. In the past year alone Fidelis House has welcomed over 4000 overnight guests, with most arriving from the western Nova Scotia area as well as some from other provinces and even other countries. For twenty-five years, Fidelis House has helped keep friends and family and the comforts of home close by.

The bonds of friendship have always been a driving force behind Fidelis House. In 1981 Shirley Cameron was diagnosed with myeloblastic leukemia and chemotherapy treatments took her to Halifax for extended periods of time. Being far away from her friends and family weighed heavily on her and she started to dream up a project: a place for hospital visitors, a real home-like environment with bedrooms, a proper kitchen table to share a real meal around, and a living room where visitors might chat into the evening hours sharing their common experience. She called the idea the Fidelis House Project, named for her mother Fidelis Cameron and the Latin root of the name, meaning ‘faithful’. Eventually, knowing that she wouldn’t survive to see the project realized, Shirley enlisted everyone she could to get involved with the Fidelis House project. Her good friend Gertrude Morse and over twenty-five community members formed the initial organizational team. The Kentville Lions Club sponsored the project and although Shirley passed away in 1988, the community had been sparked by her passion and the project continued under Gertrude’s dedicated guidance.

The project quickly became much more than just Shirley’s dream; it was an opportunity to add something necessary to the healthcare system. “Often terminally ill people feel a terrible sense of isolation,” Gertrude wrote in 1989, “this house would be the bridge to create a support system that would help them and family members cope.” Small fundraisers led to larger ones, and eventually the Fidelis House team raised the capital needed. Initially housed on the third floor of the old Miller Hospital in Kentville, Fidelis House officially opened its doors in October of 1992. But in 2001, the team received unexpected news: The Miller building was earmarked to be permanently closed. Undaunted, the Fidelis House team began fundraising again. The new plan was for an even more accessible facility that would make hospital visits even easier — no late night taxis, no extra commute. Once again, Gertrude, now along with John Calpin, was back on the fundraising trail. Their efforts paid off and the new building for Fidelis House on the grounds of the Valley Regional Hospital was completed in the spring of 2003.

Fidelis House now operates thanks to over fifty regular volunteers. Any day of the week, twenty-four hours a day, volunteers are on hand to make visitors feel welcome. Ann Marie Mentink started volunteering about a year ago. The need was obvious to her, “It’s very, very important to our region — essential really,” she says. “And the guests,” she adds, “are very grateful”.

Countless cards of thanks have made their way back to Fidelis House. One note reads, “It was such a welcome relief to have such a beautiful spot to lay our heads, get a bite to eat, and talk with other folks who had a common interest: a sick loved one.” Those visitors came from out of province. They didn’t come to sightsee or take in the splendour of the world’s highest tides, but at a time when it likely meant the most to them, they were welcomed home in typical Nova Scotian style. Shirley Cameron had a wish, and through the faithful efforts of her community and friends like Gertrude Morse, that dream became Fidelis House. Twenty-five years later dedicated volunteers still maintain a quietly fundamental addition to the healthcare system. An affordable room to spend a night, a place to relax. It’s a small comfort but one that can make a significant difference during difficult times. 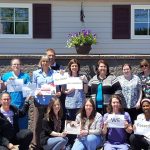 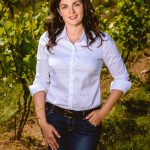