0
Ten Years of Uncommon Common Art
Uncommon Common Art (UCA) is a community wide art exhibit that highlights two of Kings County’s greatest assets – the natural beauty of the Minas Basin Valley and the abundance of creative people who live in the area. Now into its tenth year, UCA Creative Director Terry Havlis Drahos has been at the helm of the project since the beginning.
Originally from Chicago, IL, Drahos received her Bachelor of Design from Southern Illinois University. She completed her Bachelor of Education at Acadia and NSCAD Universities (Wolfville and Halifax, respectively) in 2006, specializing in Art and Technology. She has served on the Board of Directors of Visual Arts Nova Scotia (VANS) and as the chairperson of the Alliance of Kings Artists (AKA). Drahos currently lives in Wolfville.
About fourteen years ago, along with friends Nicole Evans and Pat Farrell, Drahos initiated a guerilla art project in Wolfville.“We anonymously placed a series of 12 gestural figure sculptures around Wolfville”, recalls Drahos. “The 12 sculptures appeared over a year’s time.” According to all reports, the town loved it and it turned into a public game of art between the artists and the community members. After a time, people figured out who was behind it all and the jig was up. Drahos missed the game, though, and that led her to an even larger idea. “Wouldn’t it be great to find random art installations on hiking trails, farm fields, beach fronts?” she pondered.
Drahos asked ten artist friends to join her,  a map was printed up to lead visitors to each outdoor exhibit, and the first year of UCA was up and running. Beyond that organization, Drahos let the artists do what they do best: get creative. “The first year I simply just asked friends and they ran with their own ideas”, she says. Another friend Ernest Cadegan was happy to participate by photographing all of the installations.
Since then the behind-the-scenes work has grown exponentially. “It is now a full time job to keep UCA running” says Drahos. Each year is a new adventure and for the past few years UCA has invited an outside curator to create a vision for the annual exhibit. “It keeps the project fresh and new each year”, she says. Drahos, herself, works closely with the curator to craft that vision. They work together inviting artists to submit proposals to the jury, and once the artists are selected the curator and Drahos help to find the perfect location for each piece. There’s a fair bit of problem-solving with each location that needs doing and Drahos is busy doing that as well. But it’s all been worthwhile.
While the exhibit ties together the art and the landscape, drawing a map between the various locations in and along the rural communities, the process of creating it also brings together a new community of artists each year. “In the early spring we have a meeting of all of the artists, curator, photographer, board of directors, and anyone else involved with the project. The artists are encouraged to get to know each other and work collaboratively, sharing driving and resources” says Drahos, “We want to help facilitate a sense of community amongst the artists.”
Over the years, UCA has grown and expanded in various directions. This year there are twenty-two artists making twenty art installations; a full summer and fall of art-education programming, including the popular Art in the Garden Camp for kids; free Artist Talks in Wolfville and Kentville; and Artist workshops with Marla Benton, Ernest Cadegan, Holly Carr, and Alan Bateman. “The beauty of UCA is that it is so easy to participate in”, says Drahos. “The exhibit is open every day, all day. You can find an installation close to pretty much anywhere you are in the County.”
Drahos loves that UCA has been adding to the creative culture of the Annapolis Valley. “I think Kings County is starved for visual art, particularly the kids. When I go in the schools I am always met with screeches of delight. You’d think I was handing out candy”, she says. And speaking of candy, another new element this year are the Eye Candy Machines. Participating artists have created artworks that fit in 2.5 inch balls dispensed by re-purposed gum ball machines. Tokens for the machine can be purchased for $20 wherever the machines are. You can find the machines in the Acadia Cinema building (in the JustUs! cafe/Al Whittle Theatre lobby) and at Harvest Gallery in Wolfville, as well as the Kentville Library and the Kings County Museum in Kentville.
UCA has been making its mark on the Annapolis Valley for ten years but it’s no surprise to Drahos that the Valley has welcomed this new kind of exhibit, this new way of looking at art and the rural landscape. “There are so many creative people who live here, they just needed a public venue. The historic, beautiful Minas Basin Valley provides not only a unique gallery but endless creative inspiration”, she says. “So many public art installations happen in urban areas all over Canada. We can have this too in the rural areas.” 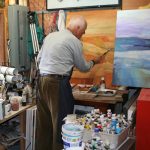