0
Mike Uncorked: Peggy & Grace Ride Again!
By Mike Butler
In 1991, Thelma & Louise took the cinema world by storm with their no holds barred, take no prisoners, estrogen-fuelled, girl power, rule breaking car jaunt across the United States. The dynamic duo, played by Geena Davis and Susan Sarandon, inspired countless female buddy comedies and dramas for years to come and that film is always worth another viewing.
Before you track down the hit film, I highly recommend taking a jaunt over to CentreStage Theatre in Kentville, at 61 River Street, to see the “Thelma & Louise of the stage”, in the new comedy-drama Peggy & Grace!
CentreStage Theatre continues its summer celebration of Canadian playwrights, following Norm Foster’s The Long Weekend, with Peggy and Grace, by Bonnie Laing. Bonnie Laing is an author and playwright living in Vankleek Hill, Ontario. She has written four produced plays, the latest of which, Phoebe’s Gift, will receive its premiere in Hudson, Quebec in August 2017.
Bonnie Laing’s novel, River Reel, was published by Sumach Press, her short fiction has been published in many Canadian literary magazines, and a collection of linked stories, set in Montreal and titled Marble Season, was published by Oberon Press.  Bonnie has written several humourous and non-fiction articles that have been published in the Globe & Mail, Ottawa Citizen, Toronto Life and Toronto Star. To learn more, go to her smoke-free, salt-free and gluten-free web site at blaing.ca.
Now, Back to Peggy & Grace!
Bonnie Laing is thrilled that “her ladies are riding again” at CentreStage. Peggy & Grace has been described as Thelma & Louise meets The Golden Girls, with our leading ladies being a bit more seasoned than the movie duo. This play is the hilarious and often touching story of two widows who decide to buy a motor home and experience life on the road. In the confines of a camper van, and particularly after picking up a hitchhiker along the way (think the Brad Pitt character from the movie!), they find that they really don’t know each other as well as they thought.
Eleven years ago, CentreStage Theatre staged Peggy & Grace to packed houses and magnificent acclaim. If you missed it then, make sure you mark your calendars for this run! A special treat for the audience is that this production boasts the same cast as the original run with treasured CentreStage alums Chérie Zinck, Diana Bishop, and Brian Smit wowing the crowds again with their impeccable wit, wisdom and heart! Eleven years hasn’t slowed down Cherie or Diana who have remained steadfast participants in many plays over the years, both as directors and actors. Brian Smit is coming back to the stage after a few years hiatus (he was raising cows and a son!) but the role is so special to him (as are his leading ladies) that Brian couldn’t turn down the opportunity to reprise his role.
A wonderful promotion to take advantage of is a special running with King’s Arms Pub in Kentville. Go to Kings Arms Pub for supper and then take the receipt to CentreStage Theatre and get $2 off the price of your admission! Kings Arms Pub is a proud supporter of CentreStage Theatre and it’s very much appreciated!
The play runs on Friday and Saturday evenings in August, as well as Friday September 1, and Saturday September 2, with only ONE matinee performance on Sunday August 27th. Call 902-678-8040 for reservations.
And if you haven’t had enough of CentreStage celebrating Canadian playwrights after Norm Foster’s The Long Weekend and Bonnie Laing’s Peggy & Grace, then pop over in October to watch Departures and Arrivals, written by acclaimed Canadian Author and playwright Carol Shields in the Upper Performance Centre for only six shows on October 20, 21, 27, 28, with matinees on October 22 and 29th!
Take advantage of this thriving local theatre community and especially this thriving little theatre! Act now… before Peggy & Grace are gone again! 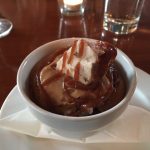