The Dome Chronicles: Confession of a Karaoke Addict
By Garry Leeson

I remember how it all started: it was in a crowded, noisy lounge in the basement of a sleazy hotel somewhere in the Maritimes. I was travelling alone and due to space constrictions, I was forced to take a seat at a table with some rowdy strangers. I’d been lured into the place by the sound of music flowing down the hallway and into my room. It’d sounded like a full band performing but I was surprised when I entered the lounge to find that the stage was almost empty- just a DJ, some sound gear, and a cluster of monitors.

“Is the band taking a break?” I asked the man on my right.

He just laughed, “There ain’t no band, man, that’s Karaoke.”

No further explanation was necessary because at that point the DJ called out a name and the man I had been talking to leapt to his feet and jogged up to join him.

“I’ll try Cheatin’ Heart,” I heard my new acquaintance say. Then several monitors around the room lit up and a Hank Williams’ recording of Cheatin’ Heart, without Hank Williams, began to blare through the speakers and he broke into song with a whiney pitchy cover of the old favourite.

It was painful to listen to but after he moaned out his last notes, the crowd broke out in a sporadic applause. He reluctantly surrendered the stage and when he returned and settled into his seat beside me, I decided to do the kind thing and compliment him on his performance. As we talked, something I had never felt before began to stir in me. I thought to myself, “I could do better than that. Hell, anybody could do better than that!”

It was the beginning of the end for me. Feigning reluctance, I let myself be talked into having a go at it. I could have just said no, but the peer pressure was too great. I was on the slippery slope. I approached the DJ and timidly made my request.

As the music started, trying my best to sound like Keith Whitney, I gazed at the monitor and belted out the words to “Don’t Close Your Eyes”. Couples began to dance while I crooned and that was it for me; I was hooked. I couldn’t get enough of it. I had to be dragged off the stage at closing time complaining bitterly that I hadn’t finished the last few tunes of my Frank Sinatra retrospection.

It was the beginning of a shady double life for me. My wife had never been overly supportive to my vocal attempts in the shower so I decided to keep my new guilty pleasure a secret. As years slipped by I was constantly on the road with my job and the siren call of the Karaoke was too strong to resist.

Most of these events were held in bars but alcohol and smoking were not my problem- I did neither. Mine was more insidious and impossible to explain. I became a regular. I was known by name in all the clubs and would often have my repertoire cued up and ready when I took the microphone. I just kept singing and eating up the applause. When you’re on the road, what happens on the road, stays on the road. Although there were venues close to home where I might have fed my habit, I forced myself to drive by local temptation. I was sure that I had everybody around home fooled.

Then one fateful day close to Christmas over twenty-five years ago it happened. I was sitting at home reading a book when I heard the phone ring and my wife answering it in the kitchen.

“What, what, have you got the wrong number?” I heard her say. Then, “Ohhhhhhh, I see. Yes, thank you, I’ll tell him.” There was a long pause before she came over to me. When I recognized the Cheshire cat smile she used on occasions like this, I knew I was in trouble.

“I just got a call from a pub in Moncton. They say you have qualified for the Karaoke finals next week. They want to confirm that you will attend.” The jig was up. I was found out. I had to make a full confession. The possibility of me winning five thousand dollar prize didn’t seem to make a difference to her.
I was given the ultimatum. “It’s me or that.”

It wasn’t easy for me to give it up. There were no support groups to help and since the problem was new, psychiatrists had yet to specialize in the area. No, I was on my own- no twelve step program or other aids- it was cold turkey for me. I really tried but I never really beat the problem- you never do, I guess. You just have to face it one day at a time. My wife was very supportive- if I even hummed I would get the “look”.

I won’t lie. I slipped once or twice. The thing that saved me from totally falling once again into my wicked ways was her encouraging me to take out my old trumpet and join a local swing band. She even condoned my singing with the group occasionally provided that it was done under strict supervision. It has become my musical methadone. It keeps me going and I’m not about to give it up. “No, no, they can’t take that away from me.” Oops, did I just sing that? 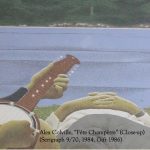 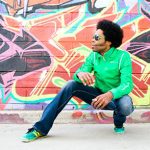