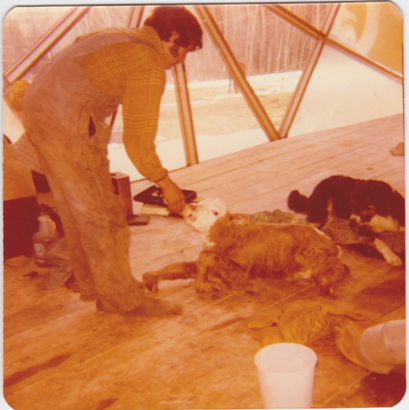 The Dome Chronicles:
A Come From Away Christmas

Come From Away! It’s an East Coast designation and since Andrea and I, both refugees from Upper Canada, fell into that category we were anxious to erase any of the negativity attached to it. We wanted to assimilate and make a good impression on our new neighbours.

With that in mind, planning to put our best feet forward, we chose Bertram Morse to be the first official dinner guest we invited to join us after the frame of our concrete dome was more or less closed in in 1972. He was our closest neighbour and had been a lot of help as we raced to get a roof over our heads, and we felt we owed him a show of gratitude.

It was just before Christmas and winter had already set in with a vengeance. We were huddled up in the couple of small rooms that we had partitioned off in the belly of our huge cement leviathan. While the old parlour stove we had acquired was stocked up and humming, the temperature in our limited space was tolerable but far from comfortable (earlier that year while the first chilly winds of autumn were swirling around us, my mother had taken to having her meals wearing outdoor apparel, wrapped in a quilt before she finally abandoned ship and headed back to Ontario.)

At the appointed time, Bertram pulled into our dooryard mounted on his vintage Ford tractor.  About three feet of snow had accumulated and if he hadn’t taken the time to put chains on the rear wheels of the old machine, he never would have made it along the woods road and up the long driveway that connected us to the outside world.

I was a little apprehensive about what the old guy’s reaction might be when he saw our situation. The frigid weather had compelled us to include some additional unscheduled guests.

Without due notice, one of our Hereford cows had given birth and her calf was not doing well so we decided to offer it more shelter than our yet to be chinked log barn afforded. We found a suitable cozy spot close to the big window in our living room. We felt that since we would be eating and entertaining in our kitchen its presence might go unnoticed and not be an issue. But, shortly before Bertram was to arrive, we were confronted with a further dire situation.

Our beloved Jersey cow, Nan, a skinny, elderly and fragile animal, was not doing well either in the cold barn full of our hardier beef cattle so we decided to lead her, shivering and blatting, through the deep drifts up to the shelter of our dome.

I had been able to carry the calf through to the living room but, as a matter of practicality, I was compelled to tether Nan and make her comfortable in the small entranceway into which our one and only door directly opened.

When Andrea had issued her rather formal dinner invitation to Bertram, his response had been, “I’ll come but I ain’t used to anything fancy.” It was just as well that he was approaching the occasion with that attitude because I hadn’t had time to warn him about the recent additions to the guest list.

When he stepped through the door and was confronted by the cow, he seemed undaunted. As I was taking his coat I thought that in coming in from the glare of the snow into the poorly lit entryway he hadn’t seen the animal but when, without further ado, he took off his cap and put it on the cow’s head before following me into the kitchen, I realized that any concerns I had been harboring were unwarranted. The matter of the animals’ presence, despite the occasional blat from the living room and the answering calls from entryway during dinner, were simply ignored by him.

His casual acceptance of us and our situation that night and the welcome we received from the whole community in the days that led up to our first Christmas in Harmony in the Valley made us feel truly welcome.  We learned that the daunting “Come from away” title had an unspoken codicil, “Come from away, you’re invited to stay.” 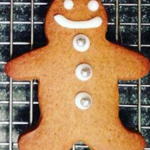 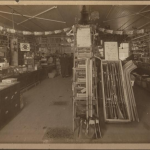