Suzie LeBlanc in the Garden Room
By Janet Kirkconnell

An Acadian by heritage, internationally renowned soprano and actress Suzie LeBlanc will be giving a recital on April 15 at 2pm as part of the Sunday Music in the Garden Room chamber music series in the K.C. Irving Environmental Science Centre on the Acadia campus. She will be performing with Simon Docking, piano.

To single out two of this very fine musician’s many accomplishments: Suzie LeBlanc is founder and artistic director of Le Nouvel Opera in Montreal, a company that since the year 2000 has been bringing classical opera, from baroque to the present, to the stage.

In Nova Scotia, she served as co-director of the Elizabeth Bishop Festival in 2011. For this, she had commissioned four prominent Canadian composers to set the poetry of Elizabeth Bishop to music. The result: an important and successful festival, with Suzie as the singer of all of the songs, and a stunning CD, “I Am in Need of Music.” The Blue Engine String Quartet, relatively frequent artists in Sunday Music concerts over the years, collaborated in the performance of the first set and thus first track of the CD, ‘Silver Water: The Elizabeth Bishop Suite,’ composed by Alistair MacLean.

Suzie LeBlanc’s program at Acadia will include Schumann Lieder, Poulenc, Faure, and Acadian songs, and, in the second half, songs based on Shakespearean texts, running the gamut from Haydn to Quilter. 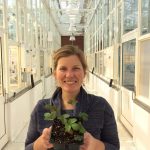