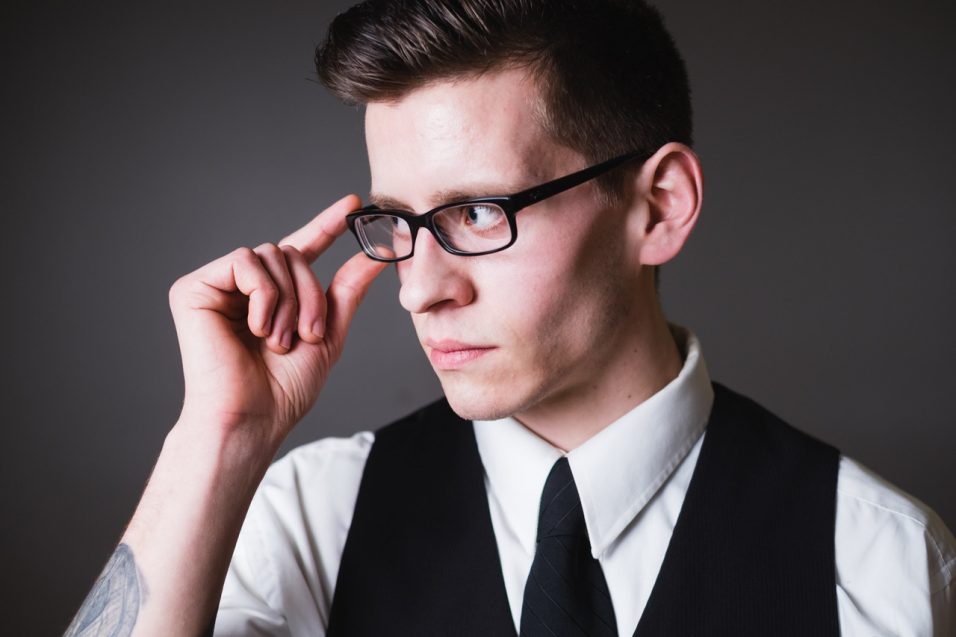 Who’s Who: Nate “The Barber” Foster
By Mike Butler

Painters, sculptors, landscapers and barbers: there’s no debate from me that all these professionals are artists. The technique, the training, the patience, and the drive to create something unique and eye-catching, is apparent in these and many other occupations. Where some people would say being a barber is not the same as being a painter, I’m afraid you haven’t been to the right barber yet. To see what I mean, take a trip to Ascension Barbershop in Railtown, Wolfville and have your hair done by Nathanael Foster.

Nate “The Barber” Foster is new on the scene. One of many talented barbers at Ascension, he’s not only an incredible hair artist, but a really great guy. I sat in Nate’s chair recently and he snipped, sheared, shaved, moulded, and created a work of art with my extremely unkempt hair that received about a dozen compliments just on my walk home from the shop! He’s a cut above the rest folks!

Nate Foster was born in New Brunswick and was there for four years before moving to Newfoundland. He has lived in Nova Scotia since he was six: “Mom and Dad wanted to move here and start a farm. I grew up in Clarence, which was essentially a farming community. I think growing up there taught me a lot about hard work at a young age. It showed me that you have to work at your goals to achieve them. They had lots to learn when they first started but they stuck it out and learned from their mistakes.”

Currently Nate wears many hats (on top of his well-coiffed locks). He works at Abhaya MMA and Adventure Climbing Gym in Greenwich, and also at Motiv Fitness in New Minas. For the better part of about two years Nate has been cutting his friends’ hair, and he has now started as an apprentice at Ascension at 24 Harbourside Drive, Railtown, in Wolfville.

On perfecting the art of hairstyling, Nate says, “With every cut I try to improve upon my technique and do a better cut than the one I gave the customer before. Having the chance to apprentice at Ascension has been huge and it’s given me the drive to want to make a career of it. Having the chance to learn with Marvin Upshaw, the owner and master barber of Ascension, and with the shop manager Mike Meaney, is helping a ton and has made the process fun, and challenging, but also approachable and easy to jump into.”

But it’s not all parts, weaves, fades, and comb-overs for this hip hair cutter. In his “spare time” Nate has been training/teaching Brazilian jiu-jitsu for five years now, and has his purple belt. Nate feels that jiu-jitsu has taught him how to work hard at something and put the time in if you want to achieve some level of mastery. He says, “I started boxing three years ago, and I just started amateur boxing. I’ve been climbing for about three years, mostly bouldering, but have done some outdoor top roping at Cape Split and ice climbing in New Brunswick. I also enjoy reading, art, archery, playing piano and guitar a little.”

Nate loves the Valley because of the people that are here and he’s met a ton of great folks through training at Abhaya, and climbing at the climbing gym. He also enjoys having the chance to work and show support for his brother (and former Who’s Who) Jon Foster, owner and operator of Motiv Fitness.

A bright young man like Nate, so positive and care-free, has many goals and plans for his future including working towards being a better barber and to continue to immerse himself in that industry. He also plans to keep training for his black belt in Brazilian jiu-jitsu. Nate also wants to someday write a book, open up his own barbershop or boxing gym, and become a better musician. Until those dreams surface, for now, Nate is doing what he loves and improving with each new head of hair that comes his way.

Having Nate tackle my hair was nothing short of an immense pleasure. His attention to detail was top-notch and while he was cutting and shaping my hair he was talking me through his process, which was a nice change from topics like the weather! So, do you need a new look? Need a fresh set of eyes, hands, talent, and heart aimed at shifting your appearance? There’s nothing like a fresh clean haircut, and Nate “The Barber” Foster is the man to help you out!

You can email Nate at fosternathanael@gmail.com, phone at 902-824-3325, or seek him out on facebook.com/natethebarberns