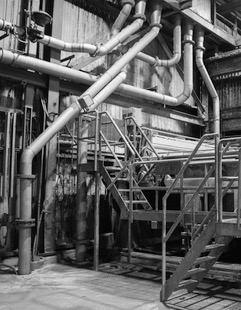 Richard (Dick) Groot is a very familiar face in the Valley. He’s a wonderful man with an exceptional photographic eye and I am proud to say he’s one of my fellow Men of Wolfville calendar buddies. If you haven’t had the opportunity to see Dick’s work before, now is your chance because he has a photo exhibit coming up that you simply have to take in. It’s not some run of the mill display…or is it? Dick has been a published writer and photographer for many years and his accomplishments include a book entitled We Wanted it to Last Forever: Closing the Minas Basin Paperboard Mill. Abandoned factories have a particular attraction for Dick. “When I reflect on their architecture, physical state, and on the hopes and expectations of the people who started these facilities and those who worked there I want to photograph them,” Dick says.

The exhibition of Dick’s work, taking place from the end of April through May 2018 at the Cedar Centre in Windsor, focuses on a visual and reflective experience of the loss of manufacturing in the Annapolis Valley. It is not a documentary of the closing of individual mills in the narrow sense, Dick says. “What I present is greater than that, because it presents these closures as a shared loss to the region as a whole. I have used my photographs of the period from 2005 to 2016, as well as small segments of interviews with people who lost their jobs in these closures, including images of the Windsor Wear mill in Windsor, the Britex mill in Bridgetown (Centrelea), the Fundy Gypsum processor and loading facilities in Windsor and Hantsport, and the Minas Basin Paperboard mill in Hantsport.”

The second part of Dick’s exhibition was inspired by his feelings while walking through the Minas Basin Paperboard Mill after it closed. He felt it was close to a spiritual experience, and his visual representation of this experience is really something to behold. The third component of his exhibit presents portraits of 12 people who lost their jobs in the Minas Basin Paperboard Mill closing, and who Dick interviewed in 2013 for his book about the closure.

The exhibition of Dick Groot’s exceptional work will open in late April and run till the end of May at the Cedar Centre for Active Health and Well-Being, a re-purposed furniture factory in Windsor located at 60 Cedar Street, and open daily from 9am to 5pm.

For questions, you can email Richard Groot at ltstudio.groot3@gmail.com (representing his LightThrough Studios) and check out his website at eyeopener2013.com for more information. 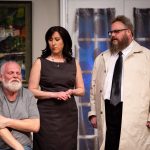