On April 6, new legislation was introduced that will provide parental accommodation for elected municipal officials in Nova Scotia. Currently, parental leave is granted by a motion of council, and requests for leave may be publicly debated. The new amendments will define parental accommodation and encompass pregnancy, birth, and the adoption of a child. It would allow those who are pregnant or have recently become a parent to miss three council meetings without risk of losing their seat, and without financial penalty, for up to a maximum of 52 weeks. It would also allow any elected official who is absent due to parental leave to return to committees on which they previously served..

The Grapevine (GV): In 2016, you were both sworn in as councillors for Kings County. Since then you’ve both grown your families — what was the situation for parental accommodation when you were first sworn in?
Meg Hodges (MH): There was none. The Municipal Government Act (the MGA) allows for councillors to miss three consecutive meetings without excuse from your council before you forfeit your seat. This did allow flexibility for a council to excuse any absence and permit someone to miss more than three meetings (as Kings County voted for me to do), but that system leaves individuals at the mercy of elected officials who are not guaranteed to be as supportive as my council was.

GV: Was the standard for available accommodation for parental purposes, or other situations for that matter, a consideration for you before you firmly decided to run?
Emily Lutz (EL): I think when you’re in the throes of raising babies almost all of your decisions are affected by having to balance your family with other commitments. I choose restaurants, weekend activities, and hotels by how able they are to accommodate young kids and how welcome (or unwelcome) we are going to feel there. Before this conversation happened around parental accommodation I really didn’t know how it would play out in the municipal context, or how welcoming the environment would be to a new mom. There didn’t seem to be a happy precedent regarding young people on council so it felt a bit scary. This uncertainty didn’t stop me from running, it was more “I’ll see when I get there.” Local government is fundamentally about community, and people seem to value young families in their communities, so that led me to believe that as a young parent I could find support for the presence of my voice around the table.

GV: How do you think the situation has previously influenced the make-up of municipal governments in the province?
MH: It’s difficult to know the baseline for municipal politics when you are just entering. For me, it feels normal to have two young moms sitting at the table. Periodically I am jolted with reminders that this isn’t how councils across Nova Scotia have looked or operated in the past (and many still don’t). Comments from staff or other councillors about the shift in perspective and dynamic that we bring are always nice to hear.
EL: I don’t think the lack of parental accommodation specifically has been holding people back, but the absence of conversation around it certainly didn’t do anything to reassure or encourage young people that they had a seat at the table. I hope we are in a time where people who haven’t previously felt included in the structures of government are feeling more comfortable getting involved. Once the door is cracked open a bit and citizens see people similar to them putting their name on a ballot we will hopefully see elected bodies that are actually representative of the diversity of citizens who elect them.

GV: What was your personal experience of the process?
EL: It was a good learning experience on making change, especially regarding the supports required and the nuances of navigating the process (and bureaucracy). Meg and I are elected officials, so we can access “the powers that be” more easily than the average person, and had an advantage when it came time to raise the issue. It became clear that it might be more difficult and frustrating for other citizens to undertake change in this way. It was very helpful that Minister of Municipal Affairs Derek Mombourquette was incredibly supportive from the outset, and our council and CAO have been forward-thinking, and cheered us on as we got the ball rolling. There were not a lot of naysayers.

GV: How do you feel about the final bill that has been introduced? Is it what you’d been pushing for — will it properly address the problem?
MH: I think about the very small negative reaction to the bill and I have to laugh. The people who are irritated that these young moms are going to “cost the system” are the same folks who say we need more young people staying and living in Nova Scotia. Politics isn’t for everyone, and simply because this parental accommodation bill has been added I don’t assume we will see a big flood of young women running simply so they can have paid “leave.”
EL: I had this great worry when the conversation began that people would view us as selfish in some way, or less legitimate because we were fighting for a change that directly affected us. I felt that people would perceive this change as us trying to “get time off” or that it would create bias in the electorates mind against young women in future elections if they decided to have kids during their term. It was a lot of pressure to try to determine what the “right” legislation would look like. As chair of the Parental Accommodation Committee tasked with the research and recommendation, I tried to balance issues like financial compensation, protection against losing positions on boards or committees during an absence, and how one’s constituents would be represented and looked after. It was so important for us to frame it in terms of “parental accommodation” instead of “maternity leave,” because we wanted to be flexible and allow new parents of any gender to be able to work and be present if they wanted to, but not constantly feel as if they were at risk of losing their seat. The new bill goes further than what the committee recommended in terms of number of weeks and the compensation piece, which was a nice surprise. I really think they got it right, and as someone with a four-week-old baby trying to navigate what the next few months look like as I transition back into work, I appreciate the security and flexibility that the bill offers.

GV: Do you see any other barriers that need to be addressed to ensure that our municipal governments are supporting members and fully reflecting Nova Scotia’s population?
MH: We need a greater cross-section of the population represented in councils. More diversity in every sense of the word. I think that a course on civic responsibilities should be mandatory for high school students like in other provinces. “Campaign School” for women is a great way to learn more about elections and becoming engaged in decision-making in your community. I would love to see campaign schools created and promoted for other cross-sections of our population to encourage more folks to run! 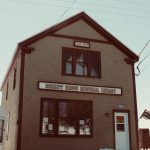