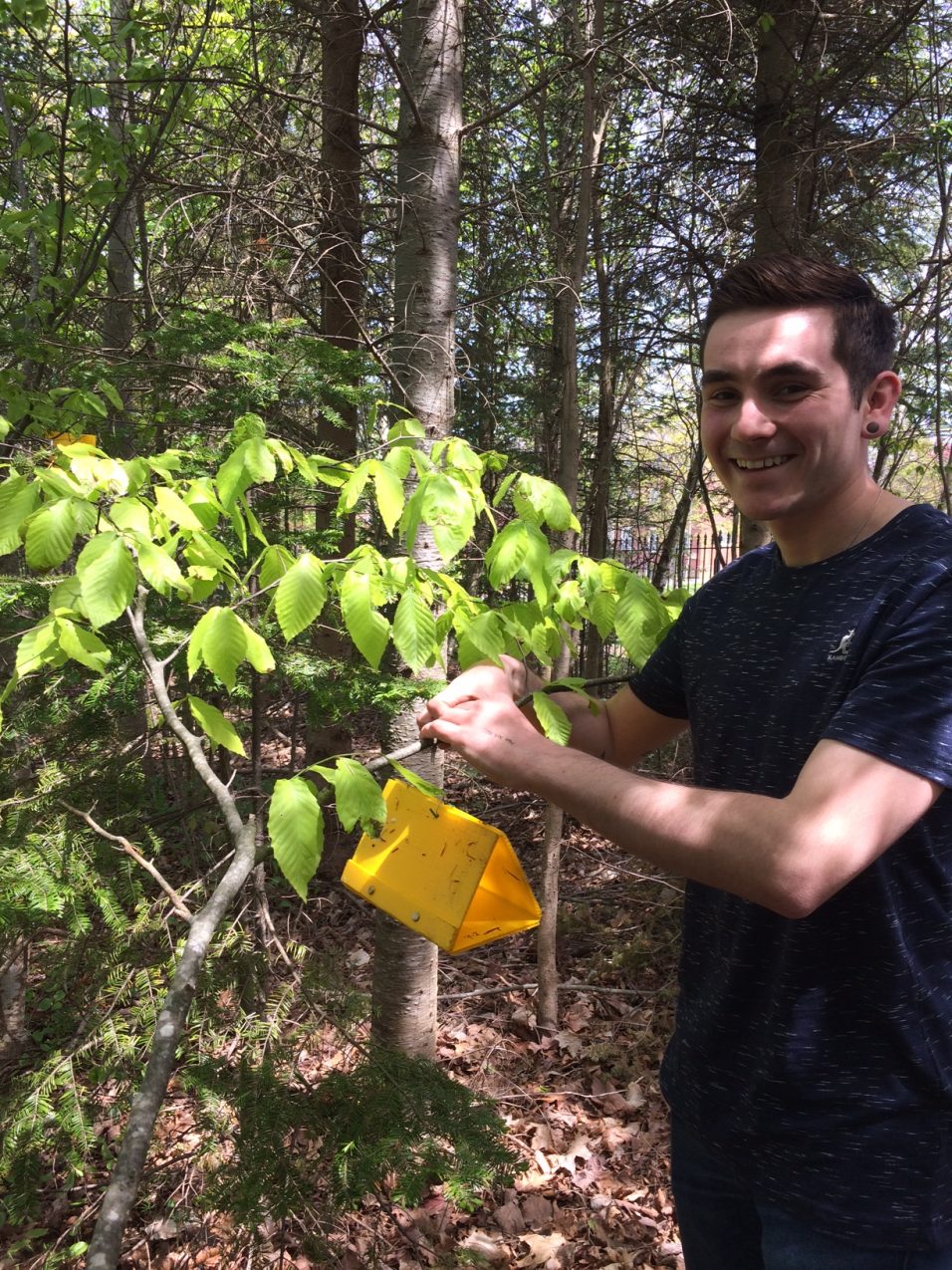 If you’ve noticed tiny pin sized holes in your American Beech (Fagus grandifolia) trees this spring you are not alone. Later in the summer you may see brown leaves and defoliation as well. Last year at the Botanical Gardens we noticed both of these symptoms. The beech leaf-mining weevil (Orchestes fagi) is to blame. It’s an invasive species that has recently become established in Nova Scotia and causes damage by feeding on and laying eggs in developing leaves.

Acadia graduate student Joel Goodwin is researching this pest to learn their habits and find out how best to trap them. Last summer Joel set out traps of six different colours and learned that the weevils are most drawn to yellow. This year Joel is comparing the efficacy of yellow triangular prism traps and commercially available yellow trapping cards to determine whether the weevil has a preference for trap type as well.

The beech leaf-mining weevil is a relatively new kid on the block. The first documented trapping that we’re aware of in the Annapolis Valley was in July 2013 (conducted by Simon Pawlowski, MSc alumni, Acadia biology). Members of Dr. Kirk Hillier’s lab have been trapping them at the Harriet Irving Botanical Gardens and Acadia’s Woodland Trails ever since. It is thought that the pest likely hitched a ride with goods being imported from Europe. It was first positively identified in Nova Scotia in Halifax in 2012.

I caught up with Joel in the garden while he was hanging traps to find out more about the weevil and the expected damage to our native beech populations. The story that he told me is a bit grim: “Beech populations in North America saw large declines in the 1900s due to infection with beech bark disease (an invasive species complex which is caused by bark invasion by beech scale insect and associated fungal pathogens). Beech trees that survive infection with beech bark disease are weakened and are more vulnerable to secondary infection. Seeing as native beech populations are already struggling to survive, this newly introduced weevil could prove very detrimental.” He went on to explain that they are already starting to see tree mortality at a study site in Halifax that is known to have been infected since 2012, so it appears that death even in mature trees can happen after multiple years of defoliation.

The good news is that there are no signs at the moment of the pest moving to other hosts. In Europe the weevil can also be found on cherry and apple trees. Weevils overwinter under scales and in the bark of trees so we can all do our part to help stop the spread of these creatures by respecting laws to not move firewood. Remember when camping this summer (perhaps at all of the great festivals this province has to offer), please use local firewood for your bonfires.

Joel Goodwin is working under the direction of Dr. Kirk Hillier from Acadia University and Dr. Jon Sweeney from the Canadian Forest Service. 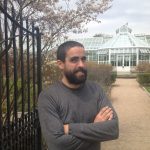