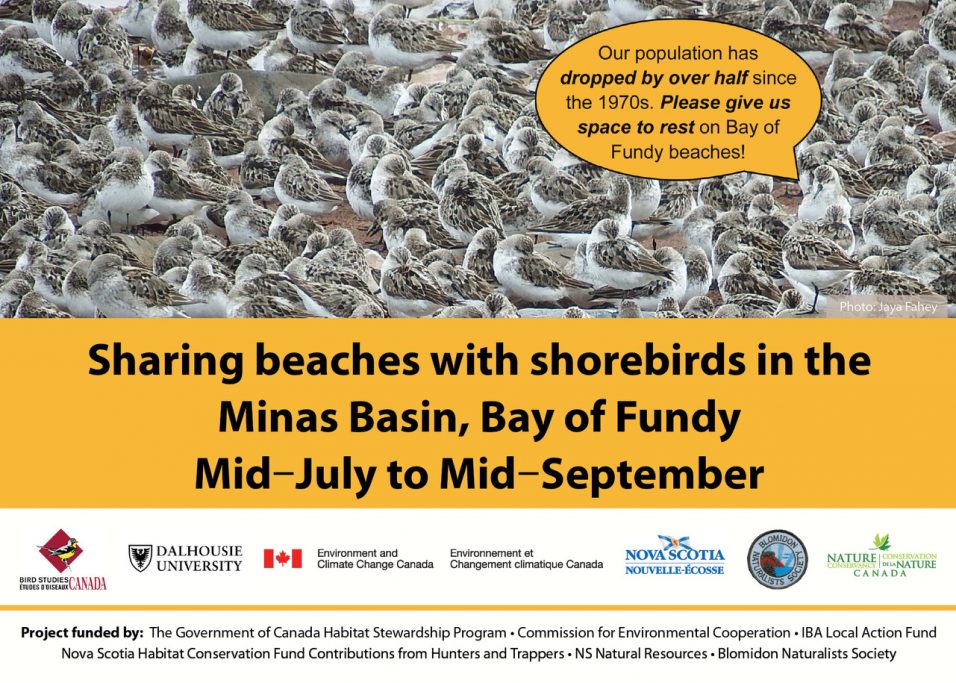 The Minas Basin of the Bay of Fundy is a critical stopover site for hundreds of thousands of semipalmated sandpipers and other Arctic-nesting shorebirds. It is designated as a Western Hemisphere Shorebird Reserve Network (WHSRN) site and an Important Bird Area (IBA) of global significance for fall migrant shorebirds. These shorebirds migrate from the Arctic to South America in the summer. They stop in the Bay of Fundy to eat twice their body weight and rest from mid-July to mid-September. At high tide, when water covers their feeding area, they look for coastal beaches to rest on, like The Guzzle and Avonport beach. Why is safe resting space critical to shorebird survival?
Shorebirds are particularly vulnerable when they seek safe places to rest on the coast during high tide – often in large flocks. Summer recreation on the coast intensifies during peak shorebird migration mid-July to mid-September. Beachgoers can disturb resting shorebird flocks by causing them to fly over water in search of safe resting sites. If shorebirds can’t find a safe beach on which to land, they fly around and waste vital energy reserves. Too much flying and not enough rest puts them in danger of running out of fuel during their epic, three-day over-ocean flight to South America (Image 1). Despite being shorebirds, they do not swim and so must fly 4,000 km non-stop.

To address these conservation challenges, Bird Studies Canada, a charity dedicated to conserving birds and their habitats, initiated the Space to Roost Project in collaboration with the Blomidon Naturalists Society, Dalhousie University, NS Natural Resources, Canadian Wildlife Service, and Eastern Habitat Joint Venture in summer 2016. Our goal is to reduce recreational pressures on shorebirds at important high-tide resting sites in the Minas Basin using a shared space approach with recreational users. We are piloting this work at two sites: The Guzzle (near Evangeline beach) and Avonport Beach. How can we help shorebirds rest?
In 2016 and 2017, with the help of beachgoers and nearby residents, we identified spaces at The Guzzle and Avonport Beach that supported resting shorebirds and had fewer recreational pressures. In 2017, using signs and outreach, we asked people to avoid these beach spaces from two hours before to two hours after high tide in August.

We were very pleased that human-caused disturbances to shorebirds declined on the designated “Shorebird Resting Beaches” from 2016 to 2017, with nearly all beachgoers respecting signs and avoiding these areas from two hours before and after high tide in August 2017. We will be installing signs once again at The Guzzle and Avonport beach from August 1-31 this year, so please look out for them! To learn more about how you can help shorebirds continue their migration (Image 2), as well as a tide chart detailing shorebird resting times in August (Image 3), please refer to our handout, which will be available at local businesses and tourist sites in the Grand Pré/Avonport area starting in July, and on site at the Guzzle and Avonport Beach in August. Please join us July 30th to celebrate shorebirds with the Nature Conservancy of Canada. We’re celebrating the Minas Basin’s 30th anniversary as a Western Hemispheric Shorebird Reserve!

There will be snacks and refreshments, music, fun for the kids, and a presentation by Dr. Rob Clay, Director of the Executive Office of WHSRN.

For more information on this celebration please contact Kerry Lee Morris-Cormier at the Nature Conservancy of Canada Kerry.Cormier@natureconservancy.ca

Learn more about Space to Roost at Facebook.com/SpaceToRoost 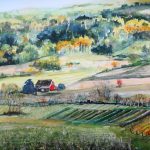 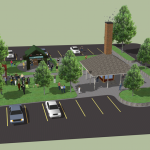