The Dome Chronicles: The Trade
By Garry Leeson

In the early nineteen seventies, the barter system was still alive and well among the small farmers of the Annapolis Valley.

One morning in May in 1974 I loaded my pickup truck with a second-hand saddle horse, a crate of roosters, and a runt pig. I was hoping that someone at the Lawrencetown Cattle Auction might take a shine to them and take them off my hands for cash or kind.

I guess I hadn’t checked the calendar because when I arrived at the site where the auction was normally held I found that I was the only one present. The event was actually scheduled for the following week. I guess I should have clued in earlier on my way along the old Number 1 highway. All the orchards were in full bloom and most people in the area would be off to Kentville to see the big Apple Blossom Festival parade. This meant that if I was going to rid myself of my unwanted cargo I was going to have to adopt a more direct approach. I set off full of hope knowing that there were several candidates for this sort of transaction living on the farms between me and home: old codgers who lived for the opportunity to best someone in a trade.

My first stop at a nearby farm proved fruitless: the man had no use for a long-toothed saddle horse and an undersized piglet.

At the second stop I was able to trade the pig to a nearsighted fellow for an old English saddle and further down the road the crate of chickens found a home with a woman who had no further use for a set of antique ox bells.

I still had the old mare but it occurred to me that the local riding school might find a use for her. She was a quiet old thing that would be good for kids to ride provided that they were not in a hurry to get where they were going.

When I arrived at the stables on the outskirts of Middleton the place was in full swing with a class being conducted in the ring and people lined up waiting for their turn. The signs were auspicious and became even more so when a chunky little chestnut pony involved in the class took off bucking and dumped a little girl in the dirt. The stable owner went to her rescue and then, cursing and swearing, led the disgraced animal out of the ring. I figured I had him right where I wanted so I proceeded to strike while the iron was hot. I backed the old mare out of the truck and while a tearful freckle faced little girl looked on, the dickering commenced.

I ended up leaving the place with the crazy little gelding and all his tack in exchange for my old mare. As I headed for the highway they were just leading her into the ring. I didn’t dally; I didn’t want to be around while they tried to coax her out of the casual amble that I knew served as her top speed. I could see the stable owner in my rear view mirror laughing and congratulating himself on getting the best of me. He didn’t know that a farmer over on the Poor Farm Road had a harness pony that he needed a mate for and that the little guy in the back of the truck was a dead ringer in size and colour. I pointed my old pickup in that direction and hit the accelerator.

As soon as I unloaded my pony at the farm and we stood him beside the one already there I knew he wasn’t going any further. The farmer got the pony and I got a mowing machine I had been hankering for.

All in all things had gone well that morning. I was home before noon, in time to take the family to the parade, the proud owner of a set of ox bells, an old saddle, some pony tack and a really good mowing machine. Andrea, always supportive, chirped “What, no magic beans?” 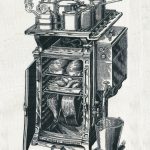 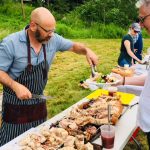