Do you play an instrument? Have you been practising but were unable to find an ensemble to be a part of? Well, look no further! Formed in 2002, the Four Seasons Community Orchestra (FSCO) is composed of members of all ages, ranging from teenagers to 80+, representing all four seasons of life. FSCO provides a focal point and opportunity for all the talented musicians in the Valley to play in a full symphonic ensemble. FSCO players come from most Valley communities from Windsor to Middleton and beyond, and FSCO even has members that come from Halifax/Dartmouth. FSCO is always open to new members and no audition is required. FSCO was founded and is directed by Roger F. Taylor and they play a variety of music: pieces from the Baroque or early classical eras (such as Bach, Hayden, Beethoven), Broadway and movie/TV themes, modern composers such as Phyllis Tate, as well as original compositions by Roger Taylor.

The orchestra currently has approximately 28 members and they are actively recruiting for all instruments, but especially for strings. All interested players are welcome and no audition is necessary although a certain level of skill is required. As a guideline, the music is suitable for high school music students in grade 10 and above. Anyone interested in playing should speak with Roger Taylor or come out to a rehearsal for more information.

A little bit more about Roger Taylor. Well, he graduated from the University of Bristol with distinction in musical composition and has written music of various genres for both amateur and professional players (including the music and orchestration for Glory Days: The True Story of the Great Windsor Fire of 1897, which was the kick off show that began Quick As A Wink Theatre in Windsor). Roger was commissioned by the Bridgewater Fire Department Band (Canada’s oldest fire department band) to compose a piece in celebration of Canada’s 150th birthday entitled Canada Fancy, which debuted on April 30, 2017. He continues to compose and arrange music for orchestra, band and choirs and has several symphonic pieces being considered for performance by orchestras in Canada and the United States. Roger also teaches music and is a conductor of both orchestral and band ensembles.

The FSCO season runs from September to June. They practice on Saturday mornings from 10:30am to 12:30pm in the basement of the West Hants Historical Society Museum at 281 King Street, Windsor. Dues are $20/month or $10 for students. The first rehearsal for the 2018-19 season was Saturday, September 8, 2018, which has passed, but there’s always time to join up and play catch up! FSCO aims for approximately two to four concerts a year: two in late fall and Christmas and two in the spring and early summer.

If you wish to see the group in action before committing, concerts this season will take place at 3:00pm on Saturday, October 27, 2018 at St. Nicholas Anglican Church, 29 Westwood Boulevard, Upper Tantallon, and, a Christmas concert, at 7:00 pm on Saturday, December 8, 2018 at Windsor Baptist Church, 411 King Street. The Baptist Church choir will also be performing with them for the Christmas concert.

For questions and more information you can email at four.seasons.orchestra2017@gmail.com and find them on Facebook at facebook.com/FourSeasonsCommunityOrchestra/ or call Roger Taylor at 902-798-1730.

Take a chance on this wonderful group… trust me, it’ll be music to your ears! 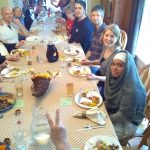