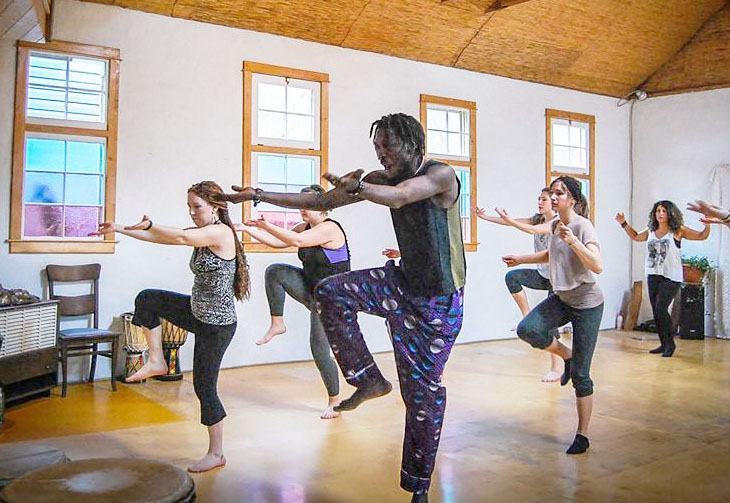 This fall, Mohamed and Marielle Duranteau are spicing up the Valley cultural scene with a series of classes in traditional West African dance at the Acadia University Chapel in Wolfville.

Mohamed Duranteau is an accomplished dancer from Guinea, West Africa, who immigrated to Canada several years ago. He and his wife Marielle, who is originally from Nova Scotia, have been teaching dance together and performing for audiences for the last 12 years — first in Victoria, BC, then in Montreal, and now in Halifax. This is the first series of classes that the duo have run in the Valley.

Mohamed and Marielle’s classes offer a fun and immersive introduction to the culture of Guinea and West Africa, in which participants dive right into the rhythms and learn traditional dance movements in a relaxed atmosphere. Each class begins with an invigorating warm up and continues with dance theory, followed by the repetition of each movement in a diagonal line across the dance floor. To add to the experience, classes are accompanied by live percussion performed by members of local group Djugdjug Ensemble.

The current series of 6 classes began on September 24 and continues every Monday until November 12 (no class on Thanksgiving, Oct. 8) at Manning Memorial Chapel in Wolfville. Everyone is welcome to drop in for a single class or sign up for all of them. The fee is $20 per class.

If the classes are well attended, Mohamed and Marielle hope to return for another series of classes in the new year — a great opportunity to expand the diversity of cultural experiences offered in the Annapolis Valley!