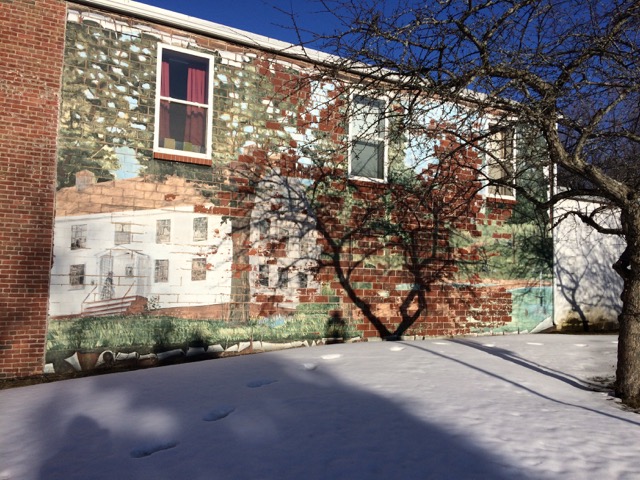 A Mural Tale
By Wendy Elliott

There is an elderly woman in Buffalo, New York who once upon a time fell in love with a piece of public art in Wolfville, Nova Scotia, and now it’s cost her money. Mary McCarthy (now 91), and her husband visited the Annapolis Valley during Wolfville’s centenary in 1993. Mary was quite taken with a bright, large new mural near the post office.

She asked her obliging husband to snap a photo of the wide historic image on the brickwork. When Mary got home she had the photo enlarged and got it framed.

Moving ahead to 2018: Mary started fretting about six months ago that her children wouldn’t want the photo in the years to come. Somehow she located the daughter of the man who organized Wolfville’s civic anniversary: me.
My dad, Robbins Elliott, who’d been director of planning for Canada’s Centennial, had arranged for Matt Cupido, a talented artist from Canning, to paint the west wall of Joe Rafih’s retail building bordering the post office front lawn.

Matt included a number of Wolfville’s Main Street heritage buildings. Today you can still pick out Randall House, but a fire obliterated most of the rest of the once colourful original artwork. Matt has been a prolific painter in both large and small size. His work includes an indoor mural at the entrance to the Acadia Divinity School and two large historical scenes in downtown Liverpool.

But back to Mary’s kind gesture: she called me six months ago, asking if the town had any interest in the 25-year-old photo. I assured her we do because so little of the original remains, and we were in the midst of Wolfville 125.
She promised to put it in the mail, then nothing. Turns out Mary had to deal with some health problems. Once she perked up, she picked up the phone again and indicated it would be coming.

A few days later, approaching New Year’s, she called for the third or fourth time. The photo was in the hands of an international shipping firm, Mary said, but unfortunately the photograph had stuck to the glass inside the frame, so the shippers had to package up the whole darn thing, frame, glass and all.
Instead of a photo that she had valued at $30, Mary found herself coughing up $138 to convey the lost mural image to Wolfville. It arrived, well-wrapped, and now a framed reminder of the town’s centennial sits on the wall of town council chambers.

Mary, like me, was gobsmacked at the cost of moving art around the continent. “Would you pass the hat?” she asked. I told her some kindly Wolfville folks might well want to contribute to the cause. Anyone with a toonie or loonie to send to this kindly New York state senior citizen can drop it off at town hall anytime during working hours. We’ll send Mary a nice thank-you card too.

Thanks for loving a little of our lost heritage Mary – there’s less of it to be seen every year. 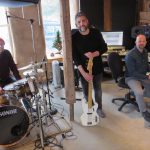