“Starting in 1927 as the Riverside Guernsey Club Show, our Ex became known as the Annapolis County Exhibition and later the Annapolis Valley Exhibition. It began as a 1-day show, but changed to a 2-day event in 1928, adding a large tent to showcase indoor events. The first permanent building to be constructed was the dining hall in 1930, at a cost of $1,100. Two large barns and a sheep shed were next to be added.

The exhibition has operated annually since its inception, and during the 1950s and early ’60s had one of the largest Guernsey cattle shows east of the Royal Winter Fair. The event is also famous for its excellent fruit and vegetable displays. In the late ’90s, the Riverside Stage was constructed and concerts have become a major attraction.

The Annapolis Valley Exhibition is not just vital for the community, it also plays a vital role in the future and sustainability of Nova Scotia’s agricultural workforce. As the youth of today see and experience the rewards of modern-day farming, participate in the communities that agricultural disciplines support, and see first-hand how communities and business enterprises thrive year after year, they will themselves wish to share in the profitability and pleasure of a lifestyle provided by the land.” 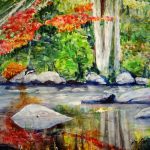