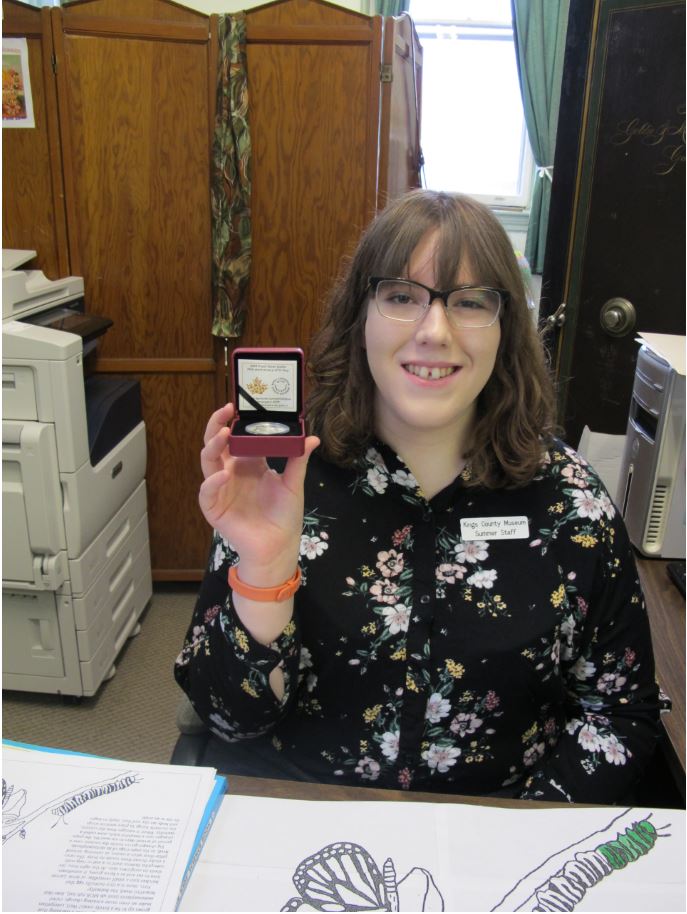 “The Royal Canadian Mint has issued a new coin (Special Edition Silver Dollar) to mark the anniversary of D-Day, and it turns out that Ellen Lewis, our summer student here at the Kings County Museum, is the granddaughter of the soldier featured on that coin! We asked Ellen to write about her connection to the coin.” –Bria Stokesbury, Kings County Museum

June 6, 1944 marked a day in history when the lives of thousands of men from countries around the world changed forever. The D-Day attacks on five beaches in France (Utah, Omaha, Sword, Gold, and Juno) saw Allied casualties of at least 10,000, and German casualties between 4,000-9,000. This day, although heavy with loss, marked an important shift in the course of WWII: Allied forces were able to move inward and take a substantial amount of land.

Before the successful attacks, before even landing on the beaches, one can only imagine what the men on the boats heading towards the coast felt; perhaps dread, terror, or merely resignation. What is harder to understand, or imagine, is that when your future is waiting for you on a beach moments away, you have the ability to tear your eyes away from it.

George Herman Baker, the man recently in the spotlight for being the inspiration behind the Royal Canadian Mint’s special edition coin commemorating the 75th anniversary of D-Day, did look back. Upon acknowledging a grasp on the shoulder from a fellow soldier, George unknowingly became a face of a generation who fought to protect a way life for all of us.

George was born near North Brookfield, Nova Scotia on August 31, 1923. The oldest of six children, he attended school at the local school house until grade six then went to work as a woodsman. In 1943 George enlisted with the Royal Canadian Army as his father and other relatives had done in WWI. George completed his basic training in Aldershot, Nova Scotia, was transferred overseas and trained with the Canadian Infantry Reserve Unit, and then was placed with the North Shore New Brunswick Regiment.

George was in active service until the end of the war in 1945. Following the war, George stayed overseas and served with the Red Cross in Germany for an extra year. He was in no hurry to return home and made many wonderful memories while there. George, for his service, was awarded the 1939-45 Star, France & Germany Star, Defense Medal, War Medal 1939- 45, and Canadian Volunteer Service Medal with Clasp. George was also presented with an award from the government of the Netherlands in gratitude for his contribution to their liberation.

Upon returning home to Nova Scotia, George studied carpentry in Cape Breton, where he met his future wife Madge. George got married, raised a family, and worked for both the Department of Highways and Department of Lands and Forests. In his spare time, he loved spending time with his dogs, solving Rubik’s cubes and jigsaw puzzles, reading, hunting, and fishing. George had an exceptional green thumb; he was known throughout his community for having an amazing vegetable garden and being able to grow anything.

The Royal Canadian Mint, in searching for a face for their commemorative coin, came across the video footage, taken all those years ago, of a soldier’s hand grasping George’s shoulder and his glance back in acknowledgement. This moment, remarkably human in an unthinkable situation, inspired the mint to immortalize the image.

The Royal Canadian Mint, however, wanted to find out who the mystery soldier was. Through the efforts of three historians and the North Shore Regiment Commanding Officer Lieutenant, George’s daughter was located and she was able to confirm his identity. George, to the family’s knowledge, did not know of the video recording, nor did any of his family members. The discovery of this footage, although very unexpected, is exciting.

Seventy-five years after D-Day, and sixteen years after my grandfather’s death, it is almost unbelievable to have this new piece of his story brought to life. In some ways it is hard: you know of a family member’s participation in one of the biggest moments in Canadian war history, but seeing them there on film is a completely different experience. I personally had seen D-Day footage and pictures before, but I had no idea that my grandfather was among the faces that I saw on television, in documentaries, and in class material.

Family members who knew George better and longer than I say he would have been embarrassed from all the attention, but honoured all the same. The family is, as we have always been, proud of him and his accomplishments. 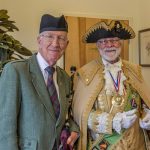