0
Wolfville, Acadia, and the Performing Arts
Janet Kirkconnell
It is doubtful that any other small town in Canada has as many venues for the performing arts as Wolfville has, chiefly because of the university. The Deep Roots Music Festival profits from this. While its opening concert is in University Hall, most of Deep Roots’ other major concerts are held in Festival Theatre, the old university rink transformed for the Atlantic Theatre Festival into a state-of-the-art theatre (praised this year for its phenomenal acoustics by the Afiara String Quartet). Still bearing the name Festival as a reminder of past glory, it was repossessed by Acadia when the ATF folded. It is now used for Acadia’s Performing Arts Series and by local community groups such as the Stage Prophets of Kentville’s St. Joseph’s Catholic Church (which stage theatre shows drawing on the considerable talents of a broader community of singer-actors). Occasionally Festival Theatre is also used by Mermaid Theatre, whose stage home, before its move to Windsor, was the auditorium of Denton Hall. Mermaid organized an international puppet festival there.
Music festivals – the Annapolis Valley (AVMF) annually, the Provincial sporadically, and on at least one occasion, the National – are held in Denton, as was Opera East in the late eighties. The NMF and Opera East also used the small, lower theatre of Denton. The local and provincial music festivals spill over into University Hall, Festival Theatre, and Wolfville Baptist Church, where concerts often take place. The Nova Scotia Youth Orchestra has performed in nearly all the venues the town and university have to offer.
Manning Memorial Chapel hosts Musique Royale, and hosted the International Guitar Festival. The Acadia Art Gallery is sometimes filled with music, and, once, even the gymnasium of the Athletic Complex provided space for the Bolshoi Ballet!
The Garden Room of the K.C. Irving Environmental Science Centre is the most recent gem on campus for concerts. This weekend (Sept 25, 2pm), the 2016-2017 season of the chamber music series Sunday Music in the Garden Room begins.
Music and theatre are presented at Acadia Cinema’s Al Whittle Theatre (450 Main St., Wolfville). Here, too, the Fundy Film Society presents high quality independent films. And Just Us! has presented live-streamed theatre from Britain and New York which has enriched Wolfville’s performing arts scene – a scene made largely possible by the physical assets of the town’s “industry”  and the contributions of the university’s faculty (nearly all of the local ventures mentioned above were faculty-founded). Acadia’s performing arts life is another story. 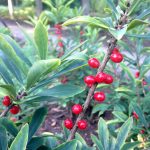