0
The Dome Chronicles: Christmas in Harmony

The Dome Chronicles project has been generously supported by Arts Nova Scotia.

The annual Christmas concert at the Harmony Baptist Church was off to a bad start. All the parking spots around the church and the adjoining hall were full and some people were parking in Alden Winott’s driveway directly across the road. It was on a slope and awkward at the best of times. When Andrea and the kids and I arrived in his yard, Alden was waiting on his doorstep and beckoned me over. Stifling his laughter, he said, “You just missed quite the sight! Poor old Mabel pulled into the yard a few minutes ago and when she got out of her car, she stepped onto that patch of ice and went flying.”

“Yeah, she’s a tough old bird and once we got her put back together, she headed right for the church.”

“What do you mean ‘put back together’?”

“Well, when she hit the ground she kind of exploded. Her boot flew off, her purse went one way, her hat and wig the other and her dentures went skittering over the ice until they came up short on my doorstep.”

“C’mon, Alden, is she really alright?”

“Yes, she’s already over in the church. You better get over there. Things have started. I hear Gram warming up her piano.” Gram Winott, Alden’s mother, had been the piano player for the church for years.

When we entered the church, Donald Morse was waiting at the door and ushered us into a front pew. It had been reserved and waiting for a family of the congregation but it had become apparent that they were storm-stayed and not coming. As Andrea, Brenden, Timothy, Zoe, Emily, and I sat down, I detected a low murmur behind us. We were not members of the church and those people crowded at the back in standing room only were not happy. The only time we pagans from further down the mountain attended church was Christmas Eve and that was because we liked to sing the carols.

I was looking forward to being there because Emily, the youngest of the family, three at the time, was just beginning to talk a lot and sing a bit, albeit with a cute little lisp. I knew that Em was kind of shy so I was prepared to help her when the singing started. It quickly became apparent that that was totally unnecessary.

We opened our hymnbooks and Gram Winott kicked in with the intro to Silent Night in a key only the sopranos of the choir were comfortable with. The doors to the church were open. It was hot – too much wood in the stove – and the beginning words of the first stanza began to flow majestically off the mountain down to the Valley. “Silent night, holy night,” rang out and I was almost moved to tears. My reverie was short lived because before anybody could finish the words of the first line, an angelic little descant voice overpowered everyone else’s, repeating those few words before the line could be finished. Emily had overcome her shyness and was standing up on the pew belting out the unfinished lines back to the choir and there was no stopping her! Carol after carol she persisted singing her untimely pitchy counterpoint repeats until, several pieces later, her audience finally collapsed in a fit of laughter. Emily, neither offended nor deterred, was prepared to continue. At that point, however, Deacon Cyril Collins took control of the proceedings and announced in a serious voice, “I would like to do something different this year. Several of you have birthdays today but there is one special birthday we should all be celebrating. I would like us all to sing ‘Happy Birthday’ to Jesus.”

At that he turned to Gram and said, “Mrs. Winott, would you please play ‘Happy Birthday’?”

A silence ensued. “Excuse me, Gladys, would you please play ‘Happy Birthday’?” he repeated.

Still nothing, and then, before he could issue a third request, Gram issued a firm, “No” that echoed up to the rafters.

Cyril was not a singer but with a hurt and hopeless look in the direction of the piano, began the song a cappella and everybody reluctantly joined in, Emily’s voice being the only one to show any real enthusiasm.

At the end of the song, sensing that further conflict between the deacon and the piano player might erupt, Marg Morse abandoned the choir loft and started ushering the young participants of the pageant into their places. She then grabbed her guitar and accompanied all the children who were appropriately garbed in striped bathrobes with towels on their heads, makeshift crowns, a blue dress, and drooping angel wings, in singing “Away in a Manger”. Emily, catching sight of the dolly Baby Jesus in the manger became transfixed by the little Christmas scene and, for the first time, did not join in the singing. 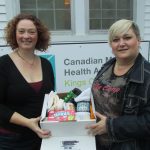