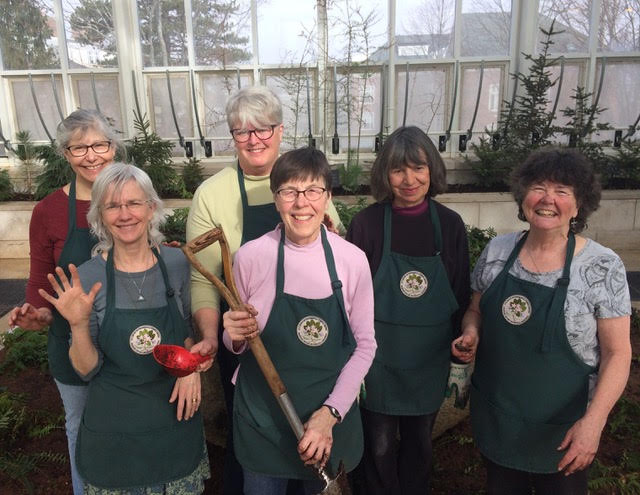 Articles Read
Grapevine Publishing
March 9, 2017
What’s growing at the Harriet Irving Botanical Gardens: Spring
By Melanie Priesnitz, Conservation Horticulturist
By the time this newspaper reaches your hands the first day of spring will be just two weeks away. Native plants of the Acadian Forest will be starting to wake up triggered by warmer temperatures and longer days.
In the Conservatory here at the K.C. Irving Environmental Science Centre spring arrived in early February. Each year, as day length increases, we turn up the heat in the greenhouse to convince the indoor native plants that it’s time to break dormancy. Most of the plants comply and send out new shoots and leaves, months ahead of their natural schedule. It’s a great treat for staff, volunteers, and visitors to be able to sit in a warm greenhouse filled with the sweet smells and sights of new growth, while snow falls outside. Does this early forcing of spring make the plants happy however?  We’re not sure; it certainly is confusing for some of them.
Our native holly Ilex verticillata (Canada Holly) has just sent out soft new green leaves directly beside its bright red berries from last fall, giving it the appearance of a plant stuck between two seasons. This may be mostly as a result of the absence of birds in the greenhouse! Other trees such as the deciduous conifer Larix laricina (Larch or Tararack) often forget to drop their needles in the fall when grown indoors, suggesting perhaps that it didn’t get cold enough for it to realize that it was time for a rest.
All plants react to their environment in slightly different ways and have varied tolerances for cold (just like humans!). We’ve discovered over the years of trying to grow native plants indoors (and trying not to freeze our pipes) that some plants require a full winter dormancy and some don’t. If you’ve visited our Conservatory over time, you will have noticed that it contains a rotating display of plants. We keep display plants indoors for a season and then transplant them outside to give them a long winter’s rest.
If you’re one of the humans with a low tolerance for cold, we invite you to spend as much time as you like in our Conservatory until outdoor temperatures heat up. There are benches in the large glass house making it a cozy, bright, and warm spot to curl up with a book or enjoy an early spring picnic.
Harriet Irving Botanical Gardens
Acadia University
botanicalgardens.acadiau.ca