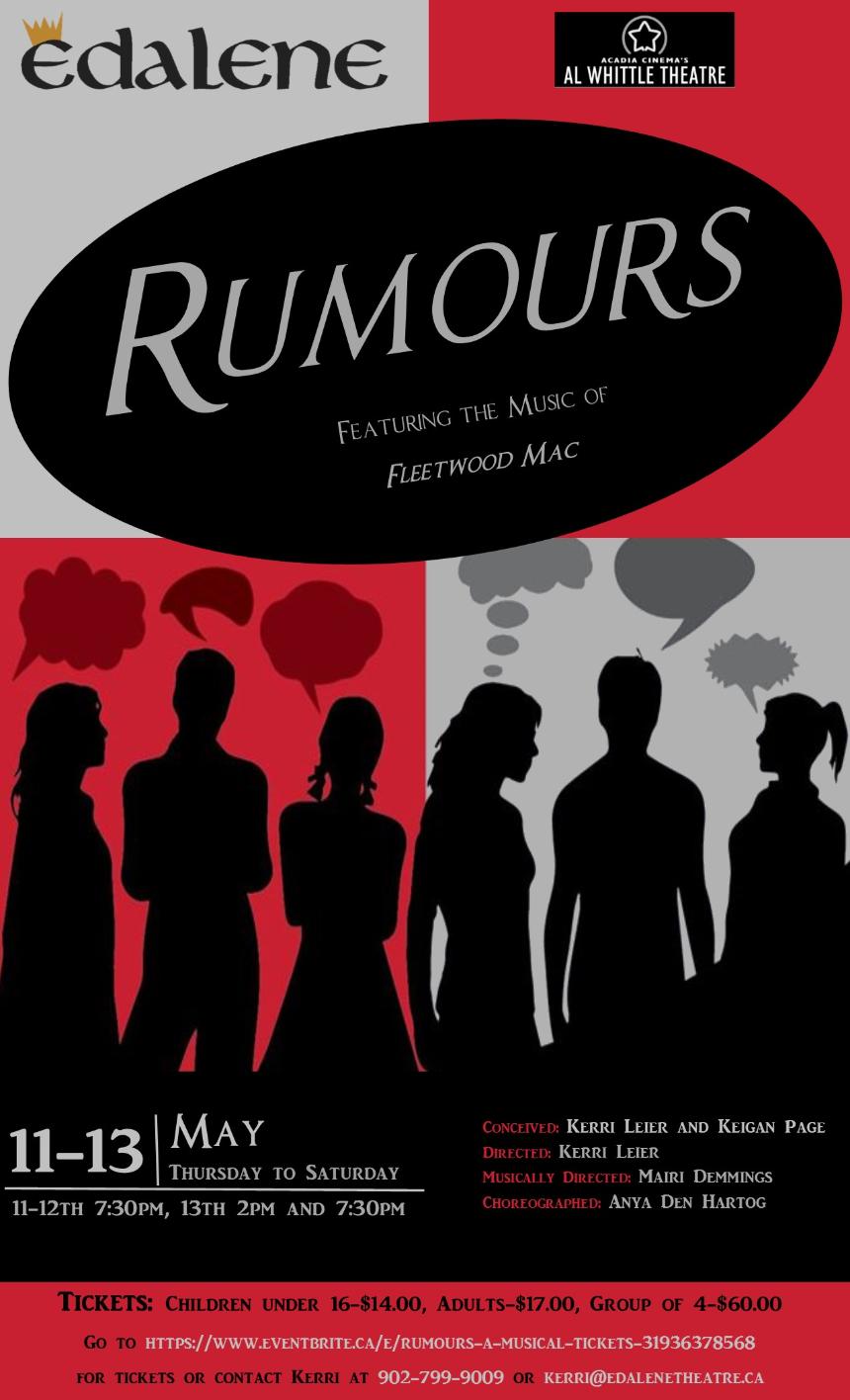 0
Mike Uncorked: SPREADING RUMORS AROUND THE THEATRE!
By Mike Butler
First, I want to thank Edalene Theatre and CentreStage Theatre for putting on two shows with very catchy titles… it made my job of thinking up a title for this article that much easier. The wonderful world of Valley community theatre is alive and well with so many shows coming your way. Check out the ValleyEvents.ca website for all the theatre and music shows going on and certainly the theatre listings in your Grapevine is a good place to check as well.
I want to tell you about two exceptional shows being offered by two companies that are very special to me.
My very first show in December 2009 was through the Edalene Theatre Company and I’ve done eight shows with them since. Director Kerri Leier has come up with a new production that you don’t want to miss. Are you a fan of the music of Fleetwood Mac? Well, I am, and since I was on the Edge of Seventeen, I’ve wanted someone to write a musical using the brilliant music of this iconic group. My friends Rhiannon and Sara and I would spend all Monday Morning listening to the Rumors album and it’s far from Little Lies to say we sang those songs Everywhere!
Kerri has made one of my Dreams come true with her new musical Rumors, playing Thursday May 11 to Saturday May 13 at the Al Whittle Theatre in Wolfville. She says of its conception, “Keigan Page, drama teacher at the American School in Vietnam approached me about writing Rumors, featuring the music of Fleetwood Mac. He wanted a show that reflected actual rumors that could occur and show how dangerous they can be. Not everything is resolved; it doesn’t all end up tied in a bow. It gets dark in places, and real, and that really resonates with the actors and the audience. We came up with the rumors and some characters together and then he let me run with it. We collaborated often on Rumors and the show was performed in Vietnam to glowing response. Now, it’s happening here in Wolfville and I am thrilled.”
This is not Second Hand News folks and The Chain of Edalene shows that have been successful are way in the double digits now. You can Go Your Own Way if you want, but Don’t Stop until you’ve seen this stellar show with a stacked cast of local actors and actresses. A lot of people know more Fleetwood Mac than they think, and they will be very surprised at how well the band’s music lends itself to this production. Contact Kerri at kerri@edalenetheatre.ca or edalenetheatre.ca for more details on upcoming shows including the summer camp show (The Addams Family), or to book your audition for their next production of Newsies!
Down the road in Kentville is another fun show filled with giggles and greatness!

You can catch the latest offering from CentreStage Theatre in Kentville (61 River Street) called Spreading It Around. This delightful comedy is perfect for the spring/early summer season to get you laughing. The story revolves around Angie and Martin, two friends in Florida, who are tired of their children only contacting them when they want money. They start a foundation, S.I.N. (Spreading It Now), to give their money to worthier causes. Sure enough, Angie’s son and his wife find out about it and they are not too happy! They come up with a devious plan to have Angie deemed incompetent but she and Martin have other plans! This play is sure to spread the laughter around!
Spreading It Around, directed by Mindy Vinqvist-Tymchu stars some CentreStage old-comers and newcomers including: Nancy Henry, LeRoy Heffernan, Ashley Hurlburt, Jeremy MacDonald, and Bob Cook. The show runs April 21, 22, 28, 29, May 5, 6, 12, 13, 19, 20, with matinees on April 30 and May 14. The evening shows begin at 7:30pm with the Box Office opening at 6:45pm. The matinees begin at 2pm with the Box Office opening at 1:15pm. It is strongly recommended that you call to reserve your spots at 902-678-8040. Visit the CentreStage Theatre website at www.centrestagetheatre.ca for details about this and upcoming shows and more.
I started with CentreStage Theatre in Summer, 2010, and I’ve done well over a dozen shows with them. The quality of shows, the fun times with cast and crew, and the friendly patrons keep me coming back for more, both as an actor AND an audience member.
Don’t miss RUMORS or SPREADING IT AROUND! Also, be sure to check out my Who’s Who profile on Simon Pawlowski, leading man for the Stage Prophet’s Anne & Gilbert, another piece of not-to-miss local theatre! Enjoy the shows everyone!