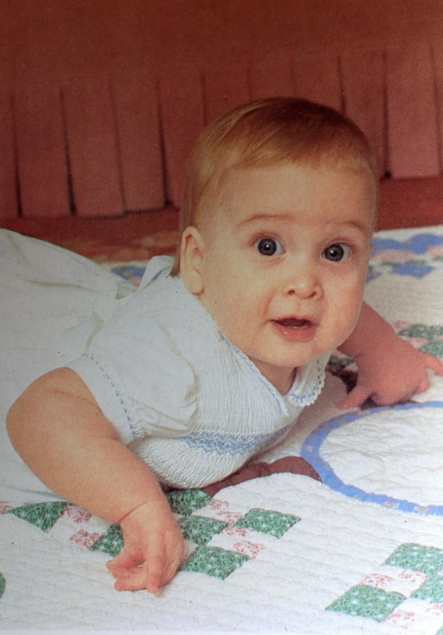 0
The Dome Chronicles: The Baby Quilt
By Garry Leeson
In 1981 we were busy running our new auction centre in Aylesford. Although we were primarily a livestock auction, we also sold other commodities like furniture and antiques. One day Andrea suggested that we try conducting a quilt auction to further diversify our business and help the local quilters to get better prices for their long hours of work. I was against the idea, so, of course, it turned out to be a roaring success. Hundreds of quilts sold at premium prices leaving a cash register full of commissions. We knew we were going to have to come up with something very special if we were to continue the success of that first year and hopefully, even improve on it.
One night over dinner the subject of baby quilts came up and I made the crass comment that it didn’t make sense to me that baby quilts, which were a quarter of the size of their larger counter parts, would often bring as much or more money than the large ones. “I know that it’s because some of them are better made and aesthetically more pleasing, but from a purely practical point of view, the ladies making these smaller creations are getting far more per square foot than those making the larger ones. Besides, we could cram a lot more of those little ones onto our display lines and I think we’ll need the space next year.” So, how could we encourage the ladies to switch over to baby quilts? One of us around the table suggested a contest but I didn’t think we could afford a large enough prize to induce our regular quilters to scale down. Then, for some reason, I remembered Lady Diana, Princess of Wales, was expecting her first little Royal.
My mind almost exploded with the possibilities. “That’s it! We’ll have a contest to sew a quilt for the royal baby. We can toss in a little cash ourselves to sweeten the pot. I know the quilters will be all over this.”
“Hold on!” shouted Andrea. “You can’t exploit the Royal family for personal gain – it just isn’t done.”
“Oh, yes it is,” I said, “and we’re doing to do it!”
“How are we going to get a quilt from a little town in Nova Scotia to Buckingham Palace?” she asked.
“Quite simply,” I replied. “We just send it to Lady Di, Buckingham Palace. We might not even need stamps. It might go ‘On Her Majesty’s Service’”.
“Somebody is going to sue us,” worried Andrea.
“What else is new?” I replied and the matter was closed.
Eventually Andrea came around to my way of thinking and when she did, she jumped headlong into the project, coordinating it with the Fiftieth Anniversary Apple Blossom Festival and lining up suitable judges. A small golden apple logo commemorating the Festival was to be embroidered in the bottom right hand corner of each quilt submitted, but other than that, every participant was free to create anything they wanted. Andrea also sent out press releases to the media, and we knew we were onto something when all the local newspapers, TV broadcasters, and radio stations carried the story. I began to think there might have been a little overkill when a live interview with Andrea and a well-known TV host was carried coast-to-coast on CTV’s Canada AM. I guess Scotland Yard wasn’t watching that morning because no objections arrived from across the pond. I had dreaded finding out that the Queen “was not amused” with my little scam.
To make a long story short, the contest and auction of the runner-up quilts went off without a hitch. Andrea and the Director of the Apple Blossom Festival displayed Marilyn Crawford’s winning quilt for all to see on the stage of the hallowed Convocation Hall at Acadia University during the Coronation ceremonies. All things considered, I felt it prudent to get that little quilt on its way to England as soon as possible. I was for wrapping it and mailing it the next day but Andrea intervened saying she had been making some enquiries and found out that the Queen had a liaison officer in Ottawa and protocol required that we ship it through her. “Whatever,” I said, “just get it on its way!” In the end, the winner herself asked if she might send it, so it was off our agenda.
I thought I had put the whole thing behind me when sometime later I received a phone call from Marilyn Crawford, the winning quilter. I steeled myself for a dressing down. It never happened. Instead, the lady was elated and almost unable to speak. She informed me that she had just received a hand written letter from Lady Di thanking her for her beautiful creation. She said the letter went on to say that the new prince’s nursery had been redecorated to match the color schemes in the beautiful quilt. I was speechless and couldn’t believe what I was hearing, and later, to our total amazement, when the first pictures of Prince William appeared in magazines and newspapers, there he was lying on the prize quilt! I could not believe my eyes. Around that time Andrea returned home from a visit with her relatives in England, and in her luggage she had a commemorative spoon decorated with, yes, you guessed it, a tiny picture of Prince William on the quilt. The following year we tried a similar contest requesting quilts for the Mulroneys’ upcoming blessed event. There were no takers.