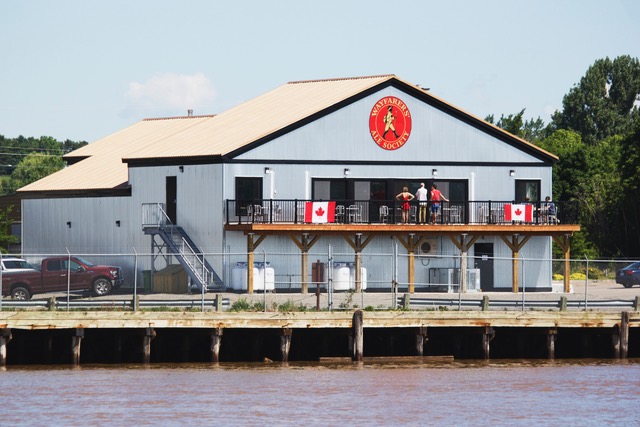 WAYFARERS’ ALE SOCIETY at the Wharf in Port Williams celebrates its official opening together with Canada’s 150 birthday on July 1st. The brewery, located next to the historic Port Williams Wharf, opened its doors last summer after completing a purpose-built brewery, retail shop and upstairs Tap Room with deck and a vista across the river. The Tap Room also serves light food and offers tours and beer sampling.

The story behind Wayfarers’ Ale is a classic tale of local success. One of how a small group of enthusiasts with a vision to make the best beers possible started from a basement operation, which was refused permission to operate, ended up creating some of the best beers in the Maritimes and in doing so are revitalizing Port Williams’ historic river business community.

The redevelopment of the wharf-side area is the vision of the Wayfarers’ Ale Society, founded in 2012 by a small group of local beer enthusiasts, who are interested in creating an Ale Society with purpose that reaches beyond crafting interesting well-made beers. The Society is just as much about looking after its members as it is about learning how to make new beers and recovering historic beers from recipes long ago forgotten.

Spokesperson for the Society, Chris Killacky, says, “From the outset we intended to support something local, to create some really interesting new jobs for local young people in the Valley and to rekindle the life and soul of what was a thriving community based around the wharf in Port Williams”. He goes on the say that the idea of the Society is to provide a community for like-minded people interested in making the best possible beers, made to accompany good foods and hearty conversation—the stuff that meeting houses and taverns throughout the ages have thrived upon. “Really,” says Chris, “the Society wanted to pull away from the sorry state of affairs that sees much of our beer in Nova Scotia owned by huge faceless corporations based outside of Canada but owning many of our familiar brands.” He goes on to say that, “The Society is there to support its ‘Wayfarers’ and to encourage others to learn about, enjoy and support locally brewed beers, local people, locally made equipment and Maritime produce” and points to belief in a more important and ethical way of doing business that is people and not profit centred.

The brewery equipment comes from DME based in Charlottetown, PEI, with additional equipment unable to be sourced locally coming from Ontario and Alberta, following the Society’s philosophy of supporting Canada first. A theme echoed by the Brewmaster, Det Heiss, who also lives locally and says, “The Maritimes produces some of the best Malt such as locally owned Horton Ridge Malt House, and hops in Canada, we just don’t have enough of some of these”.  As the Brewmaster of an impressive operation that now sees Wayfarers iconic beers across the province in restaurants, bars and the NSLC Stores, ‘Det’ as he prefers to be called, has been instrumental in developing a range of tasty beers that both men and women enjoy. In fact the team at Wayfarers’ Ale have been working with Dr Matt McSweeney, Professor at Acadia’s Centre for the Sensory Research of Food and fellow lover of all things local and beer, to develop beers that are really very enjoyable foods and that are more widely enjoyed by people with very different tastes. “This collaboration,” says Chris Killacky, “with our local university has allowed us to gain from their expertise and for us to bring a local business perspective in quality beers to their research—it’s a win-win and good for the area”.

So, what for the future? Wayfarers’ Ale isn’t just about beer or making new jobs. “We have a vision which is all about re-creating the Port Williams Wharf area,” says Chris. Over the coming years the Society intends to improve and develop the wharf so that boats and small ships can again use this as a docking area. “Work has already started on the land besides the wharf” he says. Jamie Aitken, another founding brewer in the Society says that the Society and brewery have many people to thank. “Part of the investment capital needed to fund what will be a $10 million development project has come from a Community Investment Development initiative. Local people have invested in this project through an investment fund that will also be investing in the growth of the hop industry in the Valley and in further expansion of the main Wayfarer’s Ale craft beer project”. In particular the Society has benefited from the advice and support of John Lohr, local MLA, who, Chris Killacky says has supported ‘our idea of creating local jobs for local people in Nova Scotia from the very beginning’.

The Tap Room opens 12 to 8 pm Monday to Thursday and 11am to 10:30 pm Friday and Saturday. In addition to their own range of beers the Tap Room also has local wines from Benjamin Bridge Planters Ridge & Luckett Vineyards as well as Annapolis Cider. The Tap Room is also becoming a venue for local musicians says Alanah Barton, Tap Room Experience Manager, with bands such as Ida Red as well as opening its space to new bands like the Myths who have already started to gain a good following. “We’re making interesting light food and snacks to complement our beers” Alanah, who also studies Nutrition at Acadia says.

Finally when we asked the Brewmaster which of his beers he recommended he says, with a smile on his face, “all of them of course, although, perhaps the two to taste this summer will be the One-Eyed River Hog, an IPA, and the Hellene—a light summer Blonde” which can also be found in Wolfville at the Library Pub and at other excellent eateries such as Troy and The Naked Crepe.