A Laughing Matter: Kentville Gets a Comedy Club

It started almost by mistake. Comedian Mike MacDonald was supposed to perform in Sydney, Cape Breton in April and had a last minute cancellation. Marc Sauvé contacted Paddy’s Pub in Kentville to see if Mike could perform there instead. The show sold out, and the K-Town Comedy Club was born.

Marc Sauvé, a stand up comedian himself, organizes the monthly comedy weekends at Paddy’s in Kentville. He said he fell in love with the Celtic Hall when Mike MacDonald did a show there. “It’s perfect for stand-up comedy. It has low ceilings and tight fixtures and there’s cabaret-style seating” says Sauvé. After the original comedy night, Sauvé saw potential in making it a regular event. “The goal is so the valley can have a real comedy club experience: groups of people around tables, food and alcohol being served, and intimate interaction”.

The first two comedy weekends have seen the 80-seat venue nearly full. Sauvé books comedians on a Friday and Saturday once a month, and is planning to add an amateur night on Thursday. Offering stand-up shows two weekends a month is a future possibility if crowds continue to grow.

Sauvé has been in the comedy business for almost twenty-five years, so finding talent comes easily to him. “Half my friends on Facebook are comedians,” he says. He selects both local comedians and talent from across the country. Ottawa’s Mike MacDonald has worked on a number of CBC comedy specials and will be returning to Kentville for a New Year’s Eve show. In March, Kentville will be graced by James Mullinger’s presence, a British comedian who made Saint John his home in 2014 and has since been nominated for a Canadian Comedy Award for Best Live Solo Show and a Just For Laughs Best Comedy Show Award.

How is the K-Town comedy club best enjoyed? Sauvé suggests you grab a group of friends, come early for some food (the pulled pork nachos are his favourite!), order some brews and make a night of it. Another tip: bringing a friend for a birthday will be sure to get some attention from the podium! To reserve seats, you can purchase tickets in advance at Paddy’s Pub. Also, be sure to stay in the know by joining the K-Town Comedy Club Facebook page. 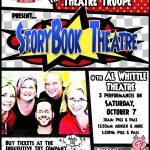