The Dome Chronicles: Thanks but No Thanksgiving

Following World War One, Thanksgiving was celebrated on November 11, the same day as Armistice Day. That made sense because by then the farmers who were responsible for the bounty of the land had harvested the better part of it and had time to relax, consume a little turkey, and chill out.

Of course eventually, as the city dwellers grew in numbers, that didn’t sit well with those who needed at least one more warm long weekend, the second weekend of October, to head to the cottage and on their way, gaze thankfully out their car windows at the farmers still slaving away trying to get their crops in.

When it was decided that Thanksgiving should be celebrated the same day as Armistice Day, Canada was still a nation primarily of farmers. The tradition lasted until 1957 when the rural lobby lost its say and the second weekend in October and its consequent Monday became the official date of the celebration, a more convenient time to gather and give thanks for something that most hadn’t done much to deserve.

It’s interesting to note that the two-month summer school vacation that was proclaimed so everybody could help with the harvest was kept intact but now is of no practical use to the farmers who really need that help.

Wouldn’t it be neat if we established a tradition of people getting off their couches and deck chairs on the long Thanksgiving weekend and heading over to local farms to offer their free services for a day or two, or maybe just the morning of Thanksgiving day itself?  There is still a lot to do around the farm at that time of year. Anybody who participates will, at the end of the day, while they sit nursing aching muscles and forking in their holiday meal with blistered hands, have a greater appreciation of what it takes to acquire the bounty everybody is celebrating.

I guess it’s time that we who live so well off the bounty of the land but do so little to deserve it give thanks, not just to some deity, but to the guy with “straw hat and old dirty hankies, moppin’ a face like a shoe.”  The farmers are an endangered species and we should honour and fight for them wherever possible. 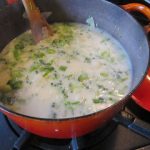