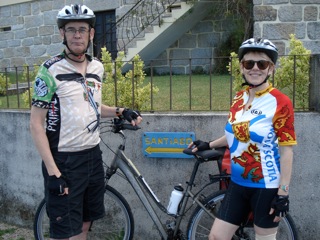 From Kentville to the Camino: Biking the Famous Pilgrimage Route Through Portugal and Spain
By Earle Illsley

This spring, two of our intrepid deliverers, and great friends of The Grapevine, Karen and Earle Illsley of Kentville, embarked on an adventure of a lifetime, and Earle has been kind enough to share some of their experiences with our readers.

The Camino de Santiago, also known as ‘The Way,’ is a series of paths, or pilgrimages, of various lengths that all lead to the city of Santiago de Compostela in Spain. Last year over 300,000 individuals hiked, biked, or rode the Camino on horseback. Some of these routes can be dated back to Roman times, when the path was thought to lead to the end of the world at Finisterre on the Atlantic Ocean. Starting in France, Spain, Portugal, and other European countries, people have been walking these routes for over a thousand years. A number of years ago there was a movie made called The Way, starring Martin Sheen, after which the Camino became very popular.

My wife and I had considered hiking or biking the Camino de Santiago a number of years ago, but had not put our thoughts into action – it was one of those bucket list things. Karen and I retired a couple of years ago but we are active in our community and church and enjoy travelling. Karen is a keener hiker than I, so the idea of biking the Camino was more appealing to me.

Our opportunity came when some friends of ours that we bike with locally decided to bike the Portuguese Camino. They put together a group of eighteen, mainly from the Annapolis Valley area, and we travelled to Portugal to bike 270km from Porto to Santiago de Compostela in Spain. Many travel the Camino with all they need on their backs, but we chose to be led by a very professional tour operator called Sergio and his team (topbiketoursportugal.com), who took care of the bike rentals and transported our luggage from town to town. The journey was more difficult than I had previously experienced, as other biking trips we have taken were on flatter ground (this is not Holland!). This route had everything, from beaches to boardwalks, ancient winding back streets, mountain paths, fields, vineyards, sunny days, rain, and a hailstorm.

People choose to embark on a Camino for many different reasons. It can be a time of self-reflection, spiritual calling and searching, a physical challenge, a desire to see the world, or a mixture of all of the above. We were travelling together as a group daily. We started off together, enjoyed the scenery together, and moaned together at the sight of the next big hill or the view of more cobblestones as we turned onto a new path. For those of you who have biked any distance on cobblestones you will understand how you learn to identify your joints and internal organs in a new way! We ate together in the evenings and reminisced about the day. I came to appreciate our friends in a new way. The custom as you pass another traveler is to say ‘Buen Camino,’ meaning ‘have a good journey.’ At rest stops I was able to talk to a few other travellers and hear their stories. The closer we got to our final destination, the more I began to reflect on the journey and what it meant to me. I was very happy to be on the trip with a group of friends, some I knew, others I had never met, but together we found a real camaraderie. At one point I had some medical issues that interrupted my travelling, but on reflection I even found that this was an important aspect of the journey. We often carefully plan our lives but unforeseen things can happen that disrupt our plans. It was with the support of our friends and our guides that things were made right and I could continue.

People were travelling from many routes to Santiago de Compostela. When we arrived there, I watched the pilgrims streaming in from all corners of the large courtyard in front of the Cathedral of St. James. I was quite moved as I speculated about the thoughts going through each of their minds as they reached the end of their long journeys. The next day we attended a small group meeting that was held by the Companions of the Camino, a group of nuns who help travellers reflect upon their journey before they go home. This was a great way of sharing our thoughts with others and helping to put in perspective what the journey meant to each of us.

One of the key things that I gained from the experience was the realization that from time to time I need to reflect on where my “Way” is going. One of the iconic symbols of ‘The Way’ is the painted yellow arrow showing the direction of the route ahead. Without those arrows it would have been very difficult to find our way. Maybe in life we need to recognize and seek out those yellow arrows.

They say that the Camino is not the end but only the start of the journey. It is both a personal and communal means of making your way from one place to another. What happens on that journey and what happens next is up to you. 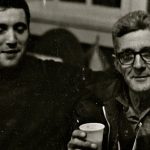 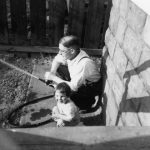