For our Performing Arts issue, The Grapevine asked Ken Schwartz, artistic director of Two Planks and a Passion Theatre, about the ambitious productions in the works for this season

The Grapevine (GV): You and Allen Cole have put together Animal Farm by Fire this year — how long have you been at work on that project and how did the idea for that show come about?

Ken Schwartz (KS): Animal Farm has been a project I have been thinking about for many years. In some ways, it’s an overdue piece of programming, given that we produce classic adaptations on our own farm, but two things have happened recently which made this choice rise to the top of the list. The first is the turbulence in world politics, which makes George Orwell a particularly important voice to revisit now, and the second is the advent of our fireside theatre, which allows us to explore well-known stories in new and unexpected ways.

Allen and I have been working on the project for the last year: I work on the book for the show, Allen composes the music, and we work on the lyrics together. We have a great working relationship which is based on many years of working together and an extensive knowledge of working musically outdoors.

GV: You’ve also adapted Chekhov’s Uncle Vanya as an outdoor theatrical production and this is the first year that the company has produced three shows — how are you managing the workload?

KS: We are producing two shows which open in early July, and the third production begins rehearsals once the first two are open. So far the schedule is working well. The three-show season allows us to make artistic choices that are more diverse, and we are excited by the opportunity.

KS: We are increasingly busy in the winter months at Ross Creek, but the activities are different. For the theatre, the focus in on planning, professional development, engaging artists, and working with playwrights, as well as community outreach. At the moment we are focussed on our core activity, the creation of live theatre, and a company of fifteen people are on site and working daily.

GV: While adapting these stories for the unique performance experience Two Planks and a Passion offers, how closely do the scripts follow the originals, and where have you found the space to make them distinctive?

KS: It varies widely depending on the work and the artistic goal. In the case of Vanya, the adaptation sticks very closely to the place and time of the original (Russia in the late nineteenth century), but the physical context of the play has been largely changed so that we can exploit the theme of environmental fragility in our outdoor setting. In the case of Animal Farm, it’s a completely original musical which sticks very closely to the plot and spirit of the novel. A novel and a play are two very different art forms, so the process of adapting each of these two works is a different process from the beginning.

GV: Along with Elapultiek by shalan joudry, how do these three shows work together or speak to each other — and is that an important element in your season planning?

KS: Because we program works that we feel are relevant to an audience here today, themes do emerge, sometimes very strongly, that link the works we are producing. This might be difficult to believe, but mostly these links aren’t deliberate. They are the result of powerful undercurrents in our society as much as any effort on my part. This year all three works have a prominent and powerful theme that connects them: our relationship with the land. Vanya is about a family struggling over the ownership of a farm and the impact of humans on the landscape, Animal Farm is a civil war over territory (in this case, a farm like our own) and Elapultiek is in part about the reconciliation between indigenous and non-indigenous people in Canada, and the unceded territory at the heart of that process. For a company dedicated to working with the landscape, it’s not surprising that all three of these works resonate with each other in this way. While rehearsing these plays, I often feel the echoes from one to the other, and one work does help inform the next. 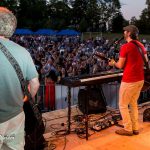