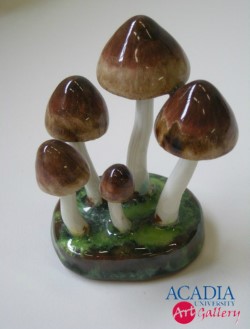 One of my favourite collections belonging to the gallery is definitely the Lorenzen mushrooms. Ernest Lorenzen, a forester and naturalist from Denmark, and his wife Alma Goguen, an Acadian from Cocagne, New Brunswick, began making pottery in 1947 as a hobby while living in Dieppe, NB. Earnest typically used the pottery wheel, while Alma modelled by hand. While living in Dieppe, their clay source was quite far away and inaccessible by car. Lloyd Shaw, then-owner of the brick factory in Lantz, had natural clay in his back yard and offered to deliver bagged clay to their door. When Alma became intrigued by mushrooms after a clay excursion, Ernest convinced her to model one for pure entertainment. Her mushroom authentically represented the aesthetics and science of the natural fungus, so much so that her work attracted botanists and art enthusiasts. In fact, Lorenzen mushrooms are so accurate that some universities use them for teaching purposes.

By the time they relocated to Lantz, Nova Scotia in the 1950s, Ernest and Alma had established themselves as a commercial source for the highly sought-after Lorenzen mushrooms. Before their arrival, Nova Scotia was well-known for their many pottery hot spots, including Grand Pré, Mahone Bay, and Antigonish. The Lorenzen pottery added a new twist to the Nova Scotia potter community. From the mixing of their different cultures and artistic backgrounds emerged a style of pottery the province hadn’t seen before.

Creating these mushrooms wasn’t a simple process; it took approximately two weeks to complete one model. Alma first tried to transport the mushrooms back to their studio to use as reference models, however, she realized they wilt and lose their colour quite quickly. To ensure accuracy, the Lorenzens then photographed and sketched the mushrooms out in the field. Paint and glaze were applied with a brush, as these miniature works of art required precise technique. Early models have their signature and mushroom genus and species inked on the base, while later models have the writing engraved in the base. In total, the Lorenzens made models of 245 different species of Nova Scotia mushrooms. In addition to their mushrooms, the Lorenzens also made models of birds, cats, otters, amphibians, and reptiles.

Visit our blog to learn more about our special collection, and like us on Facebook to stay updated on gallery exhibitions and outreach: 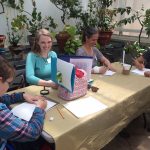 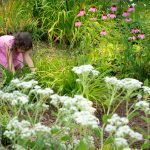