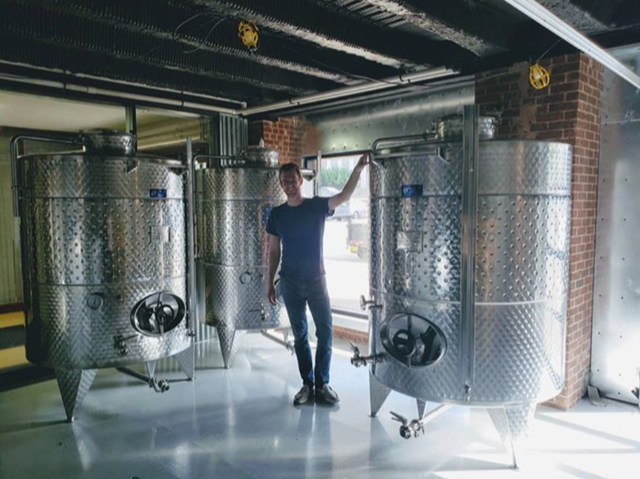 All Aboard the Maritime Express! There’s a marvelous new business in Kentville, in case you haven’t heard, called Maritime Express Cider Company. Nestled in the newly-renovated space of the historic Cornwallis Inn, where a few new businesses have found their niche (among them Sailor Bup’s Barbershop and Phantom Effects Special Effects make-up technicians), Maritime Express has quickly become the go-to place for social engagements and fun with friends in Kentville. Not only is the atmosphere delightful, but the product is top notch as well. And who is one of the people behind it? His name is Jimi Doidge and you’re about to meet him!

Jimi grew up in Hamilton, Ontario. He studied television broadcasting and his background is in video editing and production. He worked with a production company in Toronto making mental health documentaries and running their website, but after several years, and a lot of long, dark lonely days in editing rooms, he started to look for a way of branching out. “I have always had an interest in wine and cider making as a hobby,” Jimi says, “but I had never really thought of it as a potential career. So I started taking night courses at Niagara College. I kept making cider and doing a lot of online reading until 2016, when we decided to move somewhere different for my wife’s work. We chose the Valley and instantly fell in love with the area.” And now, (insert drum roll): Jimi is the co-owner and cidermaker at Maritime Express Cider Company, where he keeps himself occupied working full-time in the cidery that is below their taproom.

Once upon a time, two years ago, when Jimi started to think about doing this, he met Scott Hearn, who coincidentally had been looking to do the same thing. “We quickly realized we had the same vision for what we wanted,” he says.

When asked what makes Maritime Express different from the rest, Jimi says, “I think one of the big things that sets us apart is the building we’re in. The Cornwallis Inn was built in 1930 by the Dominion Atlantic Railway as a luxury hotel. At the time no expense was spared, and there are so many interesting features. I am still amazed every time I walk into the taproom and see how cool the space is. Another thing that we do a little differently is that we have something for everyone. Even though we make all the cider here, we also have lots of local beers on tap, as well as local wines and kombucha just in case, for some strange reason, someone doesn’t like cider.”

Jimi’s job is quite complex. He loves working with cider and monitoring the process of fermentation, from fresh apple juice to a finished pint of cider. He loves being in an industry that’s so open and supportive, where everyone helps eachother and shares knowledge, and he loves visiting orchards and presses and learning about interesting apple varieties and flavours. But his absolute favourite thing about the cidery and taproom is getting to meet so many new people every day that come in to try the cider!

When Jimi isn’t making his special brew, he enjoys touring the province and trying new beers, ciders, and wine and he loves the local arts and food scene. “I love how supportive everyone is in the craft industry,” he says. “The fact that we can open a cidery in a town of 6,000 people is amazing. And the countryside in the Valley is so wonderful; how close everything is, how friendly everyone is. How we can always drive to the ocean in a few minutes. I think the Annapolis Valley is one of Canada’s biggest hidden gems. On one hand I want everyone to know how great it is, but on the other hand I want to selfishly keep it a secret.”

“We have a lot of future goals for the cidery. I want to make some of my favourite kinds of cider (hopped, spiced, sparkling, iced, etc.), and I want to make lots of seasonal ciders with local fruits and herbs, and I want to make some single variety and heirloom ciders that will really showcase the potential of some of our local apples. I would also love to eventually get into pressing the apples,” says Jimi. “As far as business goals, we want to keep growing, and keep getting more creative with our ciders. But I also want to stay small and not get to the point where we become a factory and it stops being fun. As a whole, I hope that Maritime Express, and all the other people making cider here, will continue to grow and help make the Annapolis Valley one of the premier cider destinations in Canada.”

Take the time to travel to Kentville, hop aboard Maritime Express Cider Company, say hi to Jimi, and enjoy!