A New Chapter for Sea Level Brewing
By Emily Leeson

Since 2007, Sea Level Brewing Company has been brewing beer in Port Williams. As the first microbrewery in the Annapolis Valley, the brewery and its owner and Brewmaster Randy Lawrence helped to establish this region as a hub for passionate microbreweries dedicated to handcrafted products.

Sea Level is now about to embark on a new adventure. The Harvies (Carolyn, Matt, Nicole and Lucas) are the new owners of Sea Level Brewing. Hailing from Sheffield Mills, the Harvies will be building a new home for Sea Level Brewery, and their sister endeavour, Millstone Harvest Brewhouse, in that community. The new building will be approximately 5000 square feet and will house a new brewery space and a tasting and tap room, as well as new office and meeting spaces. The new build will allow the business to double its brewing capacity and allow them to expand the beers offered for sale in the NSLC.

“The new location will offer tastings, tours, and group experiences similar to what one could experience at a local winery,” says Harvie.

Sheffield Mills is also home to Brewmaster Randy Lawrence, and the site is already lending itself to more creative exploration for the team.

“The new building project is being built in the middle of a raspberry field operated by MacBerry Farms. MacBerry currently lease this land,” says Harvie. “They also have Artic Kiwi in production at this location. Sea Level Brewing is having discussions with MacBerry about a possible raspberry/kiwi specialty beer offering, so stay tuned for more on that.”

The Harvies own approximately 170 acres in the community and last year they introduced barley into their rotation of corn, wheat, and soybeans with the ambition of bringing more local ingredients into their brews, and becoming the province’s first “estate brewery.”

Hops have been grown on the family farm for many years and have been used in Sea Level beers the whole time,” says Harvie. “We increased our hop plantings last year with plans to introduce more hop varieties again this year. FundyHops have provided root stock and invaluable guidance in our production expansion plans.”

This year, the acreage devoted to barley will be increased, as the first crop was already a success.

“This malting barley is already being used in all of the beers being brewed at Sea Level and were first introduced starting in late 2018,” says Harvie.

Meanwhile, the Port Williams location will be retained as ‘a pilot brewery’. “Our plans for the Port Williams location include maintaining a retail space, continuing to supply The Port Pub with beer on tap as well as setting up our 1 Barrell Brewing system on site. This pilot brewery will allow us to do small batch, experimental brews which we could then transition into larger scale production offerings at the larger Sheffield Mills brewing space,” explains Harvie.

“There are many exciting things about this new expansion project. First and foremost, becoming the first estate brewery in the Atlantic Provinces, using not only our own farm-grown hops (which many local breweries currently do) but also being able to use our own farm-grown malting barley makes us a truly Nova Scotian craft brewery,” says Harvie. “Also, a very important part of this new project is that we will finally be able to offer our beers for tasting and enjoying on site in an environment where we can interact with them on a personal level.”

“The ability to have a family-owned and operated business supporting local products and local farms is something we can truly be proud of,” she says. 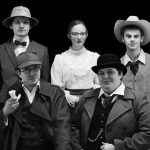 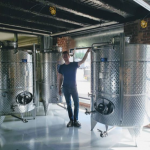