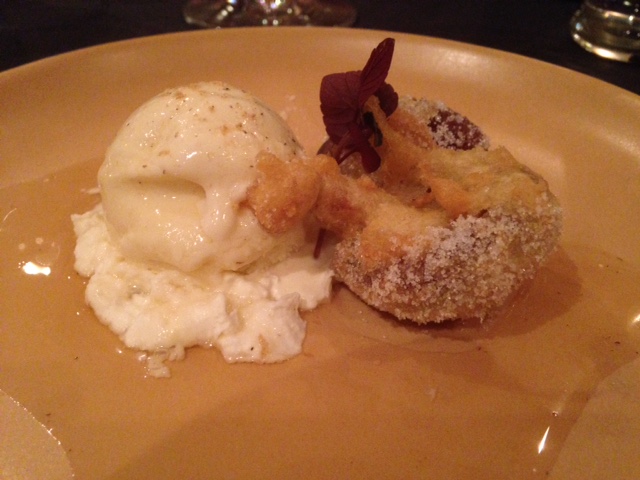 0
Dinner Out: Wines of Nova Scotia Dinner 2016, Restaurant LeCaveau and Lightfoot and Wolfville Winery
Scott Campbell
This year was the 10th anniversary of the Wines of Nova Scotia Dinner at LeCaveau. This fantastic dinner is presented alongside the famous wines of Domaine de Grande Pré Winery and one other local winery. This year the rising star of the Valley vineyards – Lightfoot and Wolfville – was featured as the second winery in this exclusive wine and dining event.
Our evening started off with an Amuse of BC Albacore Tuna Tartare served with hazelnuts, tamari, caramelized ginger, and cilantro. The fresh and tasty tartare was paired with Lightfoot and Wolfville’s Pinot Rosé. This delicious duo was the perfect primer for the rest of the evening.
Our first course was chicken and chips. Now, I’ve frequented my share of restaurants that featured menu items such as chicken and chips but, I must confess, I’ve never had them like this before. It was amazing. A delicate slice of chicken liver mousse was presented alongside a pile of crisp russets and a dollop of Dijon. A smear of the mousse on the chip with a little dip of Dijon and I was on my way to culinary nirvana. And just when you think it couldn’t get any better – they arrived with a Grand Pré Riesling to wash it all down. I am now spoiled for Chicken and Chips served any other way.
Next up was the Cavatelli. This warm and aromatic pasta course featured heirloom tomatoes, bravo olives, and House-cured pancetta. This type of stick-to-your-ribs dish is perfect for a crisp fall evening and really needs a good wine to accompany it. Enter Lightfoot and Wolfville’s award winning Ancienne Chardonnay. The last time I had a chance to try this fantastic Chardonnay was at the Rare and Fine Wines show in Halifax a few months ago. It was the only Canadian wine featured at the show and its well-deserved accolades were apparent as it nestled in nicely with the Cavatelli.
Our third course was the Paupiette de Cerf. This rich delicious dish featured local deer stuffed with puff ball mushrooms and chervil with demi and confit prunes. The combination of the deer with the demi and the prunes was spectacular. The addition of the Lightfoot and Wolfville Ancienne Pinot Noir raised the entire dish to the next level. I was meticulous as I calculated exactly how much deer and prune to combine and how much wine to sip with each bite so as to make sure I didn’t run out of any of it before the other.  Amazing.
The next course was a little lighter as we slowly began to ease ourselves out of this incredible culinary night. We were presented with an Avonlea Clothbound Cheddar alongside a grilled pear and all sitting in rhubarb molasses. The Grand Pré 1999 Vidal Icewine was perfect with the sharp cheddar and the smoky sweetness of the grilled pear.
We ended the evening with a dessert that I won’t soon forget. An Italian Plum Fritter served with Cream Liqueur Ice cream and Verjus gastrique. It was a delicious sweet treat of swirling flavours that all danced together to create this delicious cap to the evening. And as a novel treat we got to try it alongside a Tonka-Nog. Many of us aren’t familiar with the Tonka bean. It’s a unique flavour that you might compare to vanilla and perhaps cardamom… maybe. The first time I heard of Tonka beans, I was in France at the Fragonard perfume factory so that will give you an idea of how aromatic these beans can be and what kind of flavour they could impart to any dish.
All-in-all this was yet another successful celebration of the food and wine that we are so lucky to have here in the Valley. I think it is also noteworthy to point out that this event is generally a one-night event, but this year the first night sold out so quickly that LeCaveau decided to put on a second night. Cheers to everyone who participated in this great annual festivity. 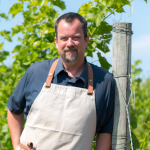