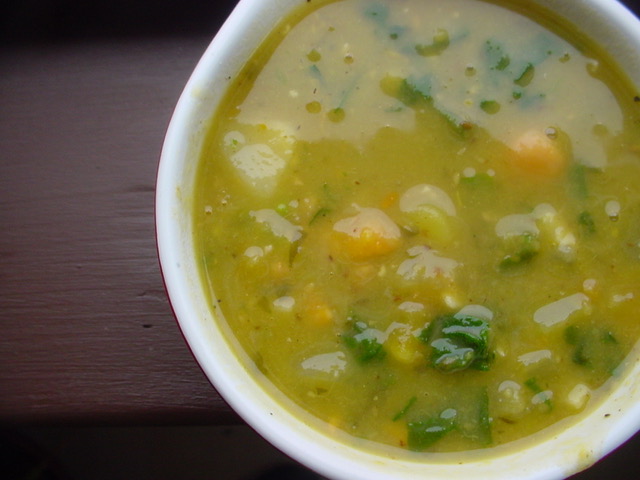 0
East Indian Split Pea Soup
By Jenny Osburn, The Union Street Cafe Cookbook
A good split pea soup is one of winter’s greatest pleasures. My mom made it often when I was growing up and she still reigns as the Pea Soup Queen. Hers used to be made with a meaty ham bone, but is now most often vegetarian; thick with sweet potato, celery, onions, and carrot and spiced up with toasted cumin. When I ran a restaurant, we spiked our version with everything from pulled pork to maple sausage, always to good reviews.
This version keeps all the comforting goodness of the classic but stirs in a good dose of exotic. I created it to complement an Indian buffet but it’s really best on its own, with your favourite bread or maybe some toasted naan alongside. Whether you fully embrace winter or just tolerate it, a good soup can bring a little sunshine and warmth into these cold dark days. So can a little trip to the farmers’ market. You can buy almost everything you need for this soup there, including Annapolis Valley-grown Sweet Potatoes!
East Indian Split Pea Soup
1 lb. (454 g) Split Peas (Mom says yellow, I say green)
12 cups Water
1 tablespoon Canola Oil
1 tablespoon Mustard Seeds
1 large Onion, diced
1 tablespoon freshly grated Ginger
3 cloves Garlic, minced
1 teaspoon Turmeric
2 teaspoons ground Cumin
1 tablespoon Salt
1 medium Sweet Potato, diced
1 large Potato, diced
2 large Carrots, diced
1 large handful Spinach, chopped (optional)
1 tablespoon Garam Masala (a blend of sweet spices, Eos and other natural food stores will have it).
In a large pot, bring the peas and water to a boil. Reduce to a simmer and cook for about an hour until the peas are mostly tender. Meanwhile, heat a large frying pan over medium-high heat and pour in the oil. Add the mustard seeds. They will toast and begin popping after a minute or so. Reduce the heat to medium, then stir in the onion and cook until beginning to soften, about five minutes. Add the ginger, garlic, turmeric, cumin, and salt, and cook for a minute before adding the sweet potato, potato, and carrot. Cook, stirring often, for five minutes, then shut off the heat. When the split peas are almost tender, add the spice and vegetable mix to the pot. Simmer for a half hour or longer (the peas should have fallen apart at this point), then check for salt and stir in the spinach and garam masala.
You can serve this soup as is, or have fun topping it. I suggest a dollop of plain yogurt, a spoonful of mango chutney, some chopped cilantro, a few toasted cashews… 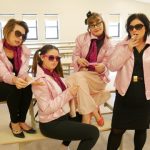 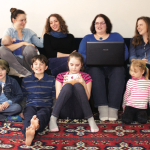