Articles Eat/Drink Read
Grapevine Publishing
March 9, 2017
Slow Food Nova Scotia: Horton Ridge
By Alan Stewart, President and Maltster
Horton Ridge Malt & Grain Co.
As the local craft beer scene grows in leaps and bounds, Horton Ridge Malt & Grain Company has begun a mission to bring an agricultural connection to beer making. The most important ingredient of beer is malt, and malt is made from grain. Malt provides the sugars needed for the fermentation process in beer making.
Before Horton Ridge, all malt used in Atlantic Canada was imported and made from grain grown in other parts of the world. At Horton Ridge, we believe that beer should honour the grain in the same way that wine honours the grape. We see the vineyards that surround our local wineries and understand that wine has an agricultural component. Beer has the same connection to the land – it all starts with grain.
Wine can be fermented directly from grapes, but beer cannot be made directly from grain. The grain must be malted first – a process that emulates the natural germination of grain when it is planted. Germination enables enzymes in the grain to break down the starchy white part of the kernel and modify the starches to sugar (maltose). Sugar is the secret to fermentation, and long ago humans discovered that a germinated grain could be used to make alcohol – more specifically, beer.
At Horton Ridge, we malt the traditional way, on a malting floor. Beginning with steeping, the grain is soaked in water to start the germination. The hydrated grain is then spread out, three inches deep, on the floor. Over the next four days, the germination process happens as starches are being modified into sugars. When the desired amount of modification has occurred, the malt is moved to a kiln to stop the germination. Kilning renders the malt to a dry, stable form, and, depending on the kilning regime, imparts various flavours and colours to the malt. These flavours and colours carry through to the beer.
Why not make local beer from local grain? Since Horton Ridge is Atlantic Canada’s first malt house, very little grain suitable for malting is grown here. We currently rely on organic grains grown in Saskatchewan. Over the next few growing seasons, more and more malting grain will be grown in our region, and our dream of beer made from golden fields of local grain will be realized.
horton-ridge-malt-grain.myshopify.com 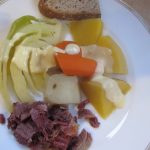