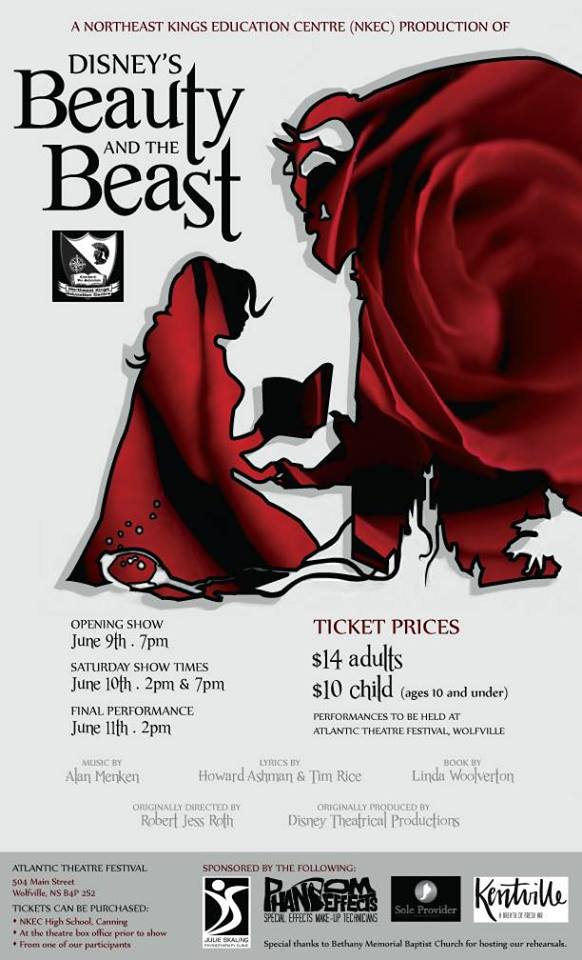 Beauty and the Beast: A Tale as Old as Time

Northeast Kings Education Centre (NKEC) is geared up, made up, and dressed up in Disney duds and ready for YOU to be their guest as they present Disney’s acclaimed stage production of Beauty and the Beast! This timeless, magical tale of love about the inner beauty in all of us has been in rehearsals for many months with some early hiccups caused by work-to-rule. But with all that behind them, the students of NKEC can’t wait to show off their talents and months of hard work. With work-to-rule in place months ago, the production was in jeopardy of not happening at all, but with the perseverance of the large teen cast, their parents, and many community supporters, the production stayed in rehearsals outside of the school space and all the extra time has paid off as the final touches are happening now.

I fondly remember, in 1991, long before some of this cast was born, seeing the hit animated Disney film and falling in love with the music, magic, and spectacle of it. After it’s success, the Broadway show came along, selling millions upon millions of tickets. It made its way twice to Neptune theatre in Halifax and most recently the musical came to the big screen in a live action film that has shattered box office records all over the world, introducing a new generation to it.

And now, after very successful runs of The Wizard of Oz and Alice in Wonderland, NKEC is proud to present its take on this enchanting and beautiful story featuring everyone’s favourite Disney characters Belle, Gaston, Lumiere, Cogsworth, Mrs. Potts, and more. This special production will feature several makeup creations by proud supporter Phantom Effects Special Effects Makeup Technicians who assisted with Oz and Alice and are Valley-famous for their autumn haunted houses and super cool, highly professional makeup designs and set pieces. Audiences are going to be mesmerized with the Phantoms creations for this production. Performances are being held at the Festival Theatre in Wolfville. Opening night is Friday, June 9 at 7pm, and remaining shows are scheduled for Saturday, June 10 at 2pm and 7pm, and Sunday, June 11 at 2pm. Tickets are available in advance through the NKEC school in Canning or at the door. I have to add that I was fortunate to be called in early on to help a bit with some dancing and I’m so proud of these wonderful actors!

This is a show you do not want to miss! It will be a joy to watch these very talented young adults sing, dance, and act their way through one of the most beloved stories of all time. A tale as old as time… the tale of Beauty and the Beast!