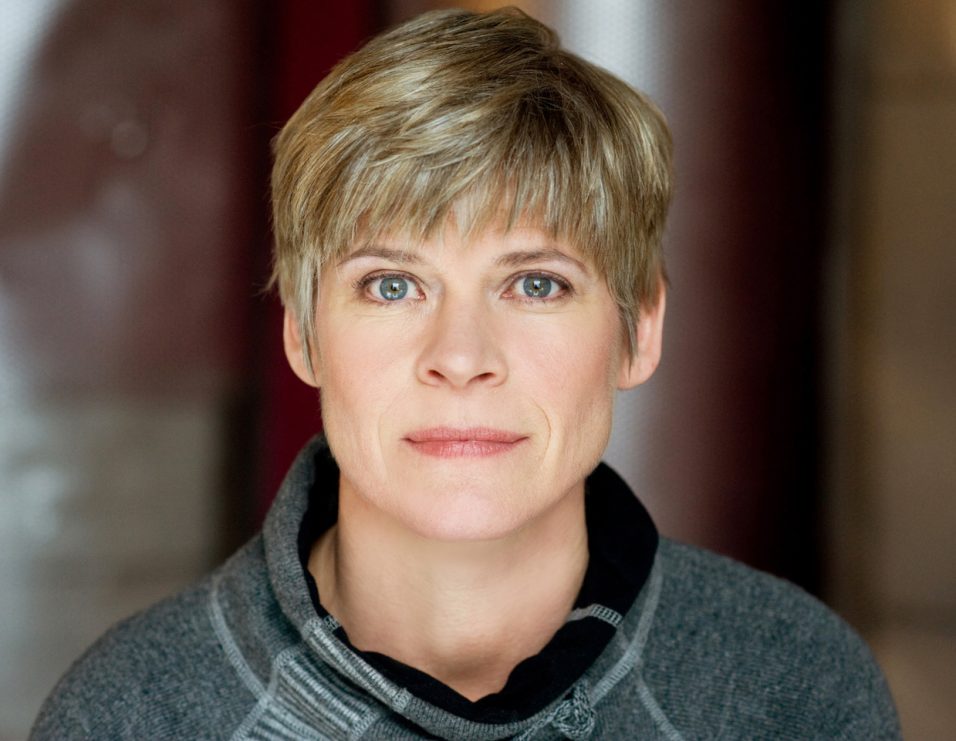 0
Who’s Who: Brooke Johnson and Her Trudeau Stories!
By Mike Butler
As the Valley Summer Theatre show “I Do, I Do” closes, a new show moves into the Al Whittle Theatre to round out their ninth season and I want to share the story of the special woman behind it. Trudeau Stories, a one-woman spectacle comes to town from August 10 to August 13 and here’s some background on Brooke Johnson, writer and star of the show.
Brooke Johnson was born in Toronto in the early sixties. Her family moved out of the city, when she was 9 until age 17, to a wooded region north of the city where Brooke lived in a little cabin, rode her horse around the moraine, and did some canoeing. Brooke was (physically) pushed into an audition for a grade 7 school play; got a part in a screwball comedy, aptly titled “The Odds are Against You”; and she was bit by the theatre bug. She went to three different secondary schools trying to find theatre courses, but there wasn’t much available at that time. Her first job in professional theatre was at 17 at the Shaw Festival, where she was a gofer and a driver for the publicity department. More theatre work continued in all capacities including work in New York, Dublin, and even circus work in Italy.
When Brooke was 22 and back in Canada, she applied for the three-year acting program at the National Theatre School of Canada, and was accepted. She states, “I’ve worked as a professional actor since 1986 and happily played on the MV Kipawo in Parrsboro in 1998, 2001, and 2003, in three different plays directed by R.H. Thomson, and then I hit that stage again in 2009 when I brought Trudeau Stories there.”
So now let’s chat about this fantastic production Brooke created. *Trudeau Stories* was created in 2007 and Brooke’s first tour of it included 14 shows in various Nova Scotia theatres, mostly on the Atlantic coast. Then she toured here again in 2015 to play at Neptune Theatre in Halifax.  She says, “Nova Scotia is one of the most heavenly places on earth — I felt an immediate affinity for the place and its people when I first worked at Ship’s Company in 1998, and have made wonderful friends there. I have performed Trudeau Stories for almost 20 thousand people now in 46 different venues across the country. It is an autobiographical piece, where I play myself at a variety of ages, and also play Pierre Trudeau, who became my friend when I was 23, and he was a year and a half out of office. My own tiny websites are www.trudeaustories.com and www.brookejohnson.ca.”
The springboard for Trudeau Stories happened when Brooke was in her 2nd year of a 3-year acting program at the National Theatre School of Canada in Montreal. She had just been elected the student representative on the school’s Board of Governors, and there was to be a gala dinner-dance soirée to celebrate the 25th anniversary of the school. As the BoG representative, she was invited to attend. Also invited was the Right Honourable Pierre Elliott Trudeau. He had left the PMO a year and a half before and was now working as Senior Counsel at a Montreal law firm.
She states, “We clicked right off the bat, despite the vast differences between us. I was a 23-year-old student; he was a 65-year-old Canadian Statesman, and icon, who had recently stepped down as our longest-serving Prime Minister. I was just trying to understand my place in my own body, let alone in the world, and he was a citizen of the world, a scholar and intellectual, a visionary. I was absolutely in awe of him on the one hand, and on the other, I was somehow instantly comfortable with him — maybe that was because he had been so much a part of my formative years, but then, that was true for millions. We shared a love of poetry, the wilderness, the joys of being alone, the challenges and the art of communicating with others, and a sense of humour that reflected a perspective. But, you know, this is my story. This is how I feel and felt — he was so much more a vital part of my life than I could ever have been to his.”
Brooke and Pierre maintained contact when she moved back to Toronto, but mostly through phone calls and letters (mostly from her end), although she did do a show in Montreal in the mid 90’s and they visited for lunch a couple of times and he went to the theatre. The key memories, though, are when Brooke was at school and their contact was fairly frequent during those two remaining years in Montreal. It was for her an exquisite and hyper-alive time that has stayed with her all these years and prompted her to share the experience through her show.
This is a production about a truly surprising friendship. There is a lot of humour in the play, and a good deal of it comes from the fact that Brooke and the former Prime Minister are — on the face of it — from such different worlds.  It’s a bit of a giddy kind of humour too, because of the fairy tale quality of the story. It is also a fast train ride back into the Trudeau years, and anyone who lived through them will be transported to those younger days. Brooke says, “I should be very clear here, that the play is about a particular and surprising friendship. It is not about politics. That said, the theatre itself is political — it is where we gather and experience something about ourselves — together.”
Trudeau Stories is being presented by Valley Summer Theatre and plays August 10-August 13 at the Al Whittle Theatre in Wolfville. Tickets are available at all Atlantic Ticketpro locations, including Cochrane’s Pharmasave, Wolfville; Wilson’s Pharmasave, Berwick & Kentville; and Windsor Home Hardware, Windsor. For questions and tickets contact Valley Summer Theatre at 1-877-845-1341. This is just a short engagement performance and one you don’t want to miss!