0
Annapolis Valley Chats: Margaret Drummond and David Whitlaw
David Whitlaw had a recent chat with GV contributor Margaret Drummond about his involvement in the local theatre community.
Margaret Drummond (MD): Tell me a bit about yourself, including where you are from and how long you have lived in the Valley.
David Whitlaw (DW): I am a “come from away” from Ontario, where I had a teaching career spanning 38 years. In 2002 after retiring I came to the Valley to visit friends. I really liked the area so made the decision to put down roots.
MD: Can you give me a short history about your involvement in the theatre community?
DW: I was invited to a casting call at CentreStage Theatre for a play they were launching. I was curious, and it just so happened that they were looking for a new lighting technician. I was more interested in stage-crew work than acting, so began my career with the company. I had never done this kind of thing before but was eager to learn. Ernest and Cherie Zinck were very supportive and, among others, welcomed me with open arms. I remained in that capacity for ten productions over a number of years until I could no longer continue due to health issues.
MD: Can you recall a favourite or memorable experience in your theatre career?
DW: I would have to say that the first production I was involved with was the most memorable. Angel Street (by Patrick Hamilton) was directed by Jean Kelly. Everything was so new to me which made for quite the learning curve.  The play is a very dark thriller set in Victorian times about a man trying to murder his wife by creating a ghost in the attic. The lighting was rather complex involving gas lights in motion, but between Ernie and myself, we pulled it off. It was a great success! They were very pleased with what I did and asked me to stay on.
MD: What other productions stand out in your memory?
DW: One show I particularly enjoyed was “Sister Amnesia’s Country Western Nunsense Jamboree” (by Dan Goggin), a hilarious musical comedy about a group of nuns who launch a country and western show. This play was a real challenge as they had installed a new lighting board with which I was not familiar. The director expected me to produce a number of special lighting effects. So I jumped in, did my best, and we pulled off a great performance. Then there was the classic Arsenic and Old Lace (by Joseph Kesselring), starring Diana Bishop who is such a wonderfully talented lady! Don’t Dress for Dinner (by Marc Camoletti) was a delightful farce, and I cannot forget “Who’s On First” (by Jack Sharkey) in which I played the voice of the genie in the magic lantern! One of the last shows I did was See How They Run (by Philip King), directed by Roger Prentice who, for many years, was the chaplain at Acadia University. He was also involved with the annual Fezziwig productions. Roger is a very fine gentleman and we enjoyed working together. All in all, it was a great experience, and each show had its unique challenges. I have many fond memories of time spent hanging out with a bunch of thespians!
MD: Do you have any advice for young people getting into the theatre scene?
DW: I would say don’t be afraid to get involved and make a fool of yourself!  Also, there is the old story about a young man walking in downtown New York near Broadway who unknowingly bumps into the famous violinist Yehudi Menuhin. “Excuse me sir, how do you get to Carnegie Hall,” he queries. Menuhin replies, “Practice, my son, practice!” 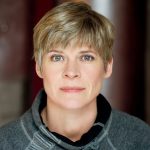 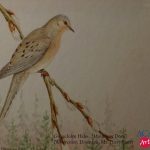