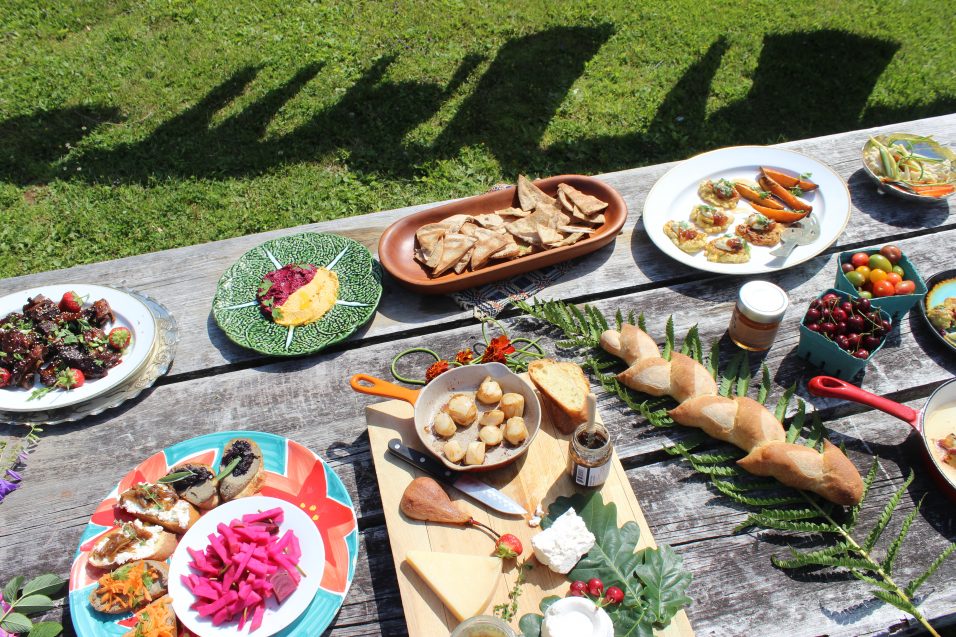 The Kitchen Party Cookbook!
The Grapevine Chats with Jenny Osburn

Following the success of The Union Street Café Cookbook in 2015, Jenny Osburn is back with another volume of delectable dishes called The Kitchen Party Cookbook: Recipes for Potlucks, Shindigs, and Good Times in the Maritimes. Designed by award-winning letterpress artist Laura MacDonald (Deep Hollow Print) and featuring a Nova Scotia food map by Monica Beaton, The Kitchen Party Cookbook keeps the good times rolling with more than sixty fresh and fun new recipes. Joel Plaskett declares that The Kitchen Party Cookbook is “the proof in the pudding” that Nova Scotia is “a great place to live and eat,” Matt Andersen praises the new recipes as “comfort food by any definition,” and Bob Snider jokes that “the only problem with going to one of Jenny’s kitchen parties is that a week later, you’re hungry again.” he Grapevine (GV): How long have you been working on this cookbook?
Jenny Osburn (JO): The Kitchen Party Cookbook began to take shape about this time last year. I had just ordered a third printing of The Union Street Café Cookbook and decided it was time for a new one! It started life as a holiday cookbook but there were so many great party recipes I wanted to include that they took over. As I worked away it turned into a cookbook that celebrates my two favourite things, Nova Scotian food and music.

GV: How does it differ from your first?
JO: Well I don’t run a restaurant anymore so it came together in a different way. The first book was a response to the recipe requests I would get while I was chef/owner at the Union Street Café. This time it’s recipes I’ve made over and over at home for family and friends. It’s quite a bit bigger than the first and comes complete with a map to my favourite places AND a party playlist! What’s not different from the first is that I’ve chosen to work with Laura MacDonald of Deep Hollow Print and Gaspereau Press again. Laura’s amazing art is featured throughout the book, and she’s printing the cover on her big ol’ Vandercook press. I feel so lucky to work with her. I just love that we can make a beautiful book right here in the Annapolis Valley.

GV: What does the process of coming up with recipes for the book look like?
JO: I’ve been cooking and collecting recipes since I could read and write so it was fun to look back through my notes. Most of the recipes in the book are ones I’ve been making for many years. Some I’ve stolen from my mom and friends and others are inspired by travelling around our sweet province and in Spain and Italy.

GV: What have been your major influences?
JO: I love food writing and get teased for reading cookbooks like novels. I have a decent-sized collection, but the dirtiest, most dog-eared ones are The Joy of Cooking and all of Chef Michael Smith and Mollie Katzen’s cookbooks. There are a lot of really great restaurants run by hard-working, creative and talented cooks in Nova Scotia and I find that very inspiring! But most of all, my Mom has shaped who I am as a cook. She’s adventurous, cooks with her whole heart, and has traveled the world in her own kitchen.

GV: What’s your favourite dish in the book?
JO: I’ve been making samosas since junior high, so those have a special place for me. So does the seven layer dip my Mom made for all her parties in the eighties, and the Greek nachos that my old cooking bud Annette suggested I include. I’ve also got a bunch of great pizzas and meatballs and tiny donairs and dips. It’s hard for me to choose! I’m so excited to be sharing these recipes.

GV: What role does the Annapolis Valley have in the cookbook?
JO: I’m a kid who grew up in the Valley not knowing what to do with my life. Then I moved away for a few years and worked on Saltspring Island, BC as a cook. Coming back home I saw this place in a brand new light. I was so excited to open a restaurant and have the chance to showcase all of the wonderful things being produced here. I still am, and that was almost 20 years ago! GV: What’s the best kitchen party you’ve ever had? What did you eat?
JO: I had a blast hosting staff parties at my house when we ran the restaurant. Everybody that came was a food lover and it felt so good to celebrate together. The cleanup the next day was always outrageous.

GV: When and where can folks pick up a copy?
JO: In the Valley you’ll find it at Box of Delights Bookshop, North Mountain Coffee, Stirling’s, Chisholm’s, Hello Handmade, The Noodle Guy, Meadowbrook, and The Union Street. Best of all come join us at the Kitchen Party Cookbook Launch 2-4:30 on September 17th at The Noodle Guy! 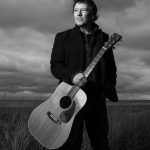 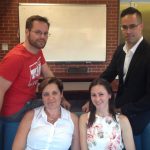