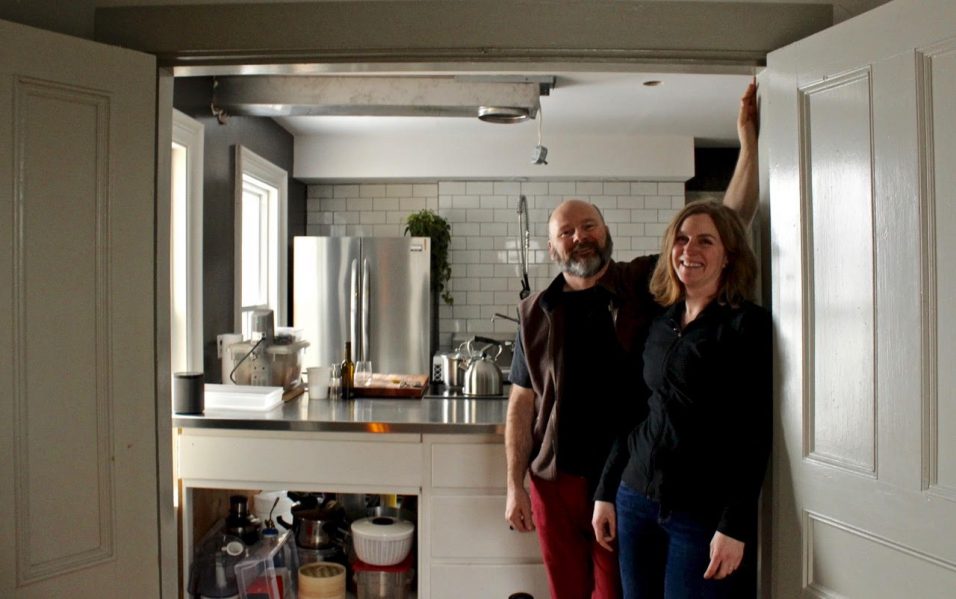 After many days of what seemed like spring, we had a resurgence of winter. As I pull up to Bessie North House I see a perfect row of buckets on each of their maple trees along the road. I am hoping for a view of the north mountain and their property, but even in this proximity, the storm clouds and mist are hanging low. The fields that were clear of snow for a few weeks are now covered again. I won’t be taking a farm tour today.

Inside it is warm, cozy, and relaxed. This is the first weekend they’ve had off from catering, or hosting private dinners, in a few months. If they leave the door open, the first thing you see when you walk into the house is the kitchen, and Dave is standing over a pot of maple syrup that he and Susan are just finishing off indoors, after boiling it down mostly outside. “Have you ever tried maple vinegar?” he asks me. Everyone makes maple syrup this time of year, so this is his spin on the sweet treat. I prepare myself for the vinegar hit, as if for a medicinal shot, but this vinegar is a perfect balance of sweet and sour. It’s so simple: a short ferment with local cider vinegar, and what’s special about it is that the syrup came from the trees just outside their door. He’s already got another batch in the works and I’m sure he’s imagining all the different ways he can use it on the menu.

It’s winter, so maple syrup is what they’re producing right now, but the summer will keep them busy with the aim to grow all their own produce for the restaurant on their own property, and to preserve (can, freeze, dry, and ferment) it in perfect condition, with the essence of each season. For now they supplement with produce from other local farmers, and they will always have partnerships with other farmers to supply them with meats and the other few things that they won’t be growing themselves.

“I hate having a blank sheet of paper,” says Dave about creating his menus. He likes to take the vegetable-forward approach and to build a dish that celebrates each vegetable as it comes to its peak in the season. “We’ve got the best ingredients because we’ve picked them that morning…and they’re going to show up on your plate and be compelling. In the summer imagine having a big ol’ bowl of gazpacho with a basil sorbet. That’s not much of a stretch,” he says, showing his mischievous streak in the kitchen. “There’s always a fun note…Or [how about] pea ice cream?” “Don’t make me say that one, Honey,” Susan rebuffs. “Let’s think of another name for that.”

They haven’t officially opened their farm-to-table restaurant yet, but they have hosted various private dinners for friends and other local guests, one of which I was lucky to attend. They tell me how they’re not quite done their renovations yet: the walls have yet to be painted, and pot lights and a range hood need to be installed.

When they open in June, they will be having a loose 6pm seating. When you plan your visit, be sure to arrive a bit early so you can explore the farm property. This was one of the drawbacks of our late February dinner, we couldn’t see our surroundings when we arrived, but everything will be in full swing when they open this summer. It’s a 5-acre lot, long and skinny, that runs along Bessie North Road in Canning. Bessie is the namesake of the restaurant and the road on which it is found, and she is the former resident of the home. Many neighbours and connections on social media are sharing their stories about Bessie, and Susan is collecting these stories about her. Bessie was a teacher in the community many years ago, and Susan is happy to share the history of the home and community as she welcomes guests for dinner.

They have the dining room set up on the main floor of the house, and the kitchen is in the old dining room. There is only room for 12 seats, but that’s not the only reason they’ve chosen to keep things small. “I’ve been working in the restaurant industry my entire life, and when you’re working in a big restaurant it’s hard to connect with people. With twelve seats you’re really able to connect with people on a different level,” shares Susan.

Be prepared to try a whole range of dishes. They’re offering an 8-course tasting menu. Dave pointed out that this format is a great vehicle, as your palate fatigues after 3 or 4 bites. He wants you to finish the plate wanting more, and then he’ll take you in a different direction, on to the next course.

My favourite dish at our dinner was the spiralized kohlrabi with blue cheese, walnuts, chives, and leeks. I normally don’t like blue cheese, and this was the base of the sauce, but the dish blew me away with flavour and texture. Dave agrees, “I was really happy with that plate as soon as I saw it in the bowl.” About my apprehension about the blue cheese, Susan says, “We hope that people embrace that, and they try every course and find something they wouldn’t normally eat, and find that ‘this is amazing.’”

Dave and Susan met not that long ago while Dave was running Front and Central in Wolfville, and Susan had just taken a position at Avondale Sky Winery as retail operations manager. She saw that Dave had started taking his team to different wineries in the area and that they hadn’t yet been to Avondale Sky. “I called him out on Twitter,” she says. So they planned a meet up at the Wolfville Farmers’ Market. They started talking, then dating, and the whole process felt natural. If you had asked either of them about their dreams before they knew each other, they would have both told you about an idea similar to what they are doing now. They’re living their dream at Bessie North. This dream is more than just a restaurant. They do it because they love every aspect. Last summer, as they were starting up their farm, Dave says, “I wouldn’t eat, I’d be so engrossed in what I was doing…” They want to make connections not only with people, but with the food and how it grows. It’s a lifestyle. “It never feels like work. We’re in our own home, we’re on our own property. We’re not only growing food for the restaurant, we’re growing food for ourselves.”

Their home has already become a place that showcases true Nova Scotian hospitality, where neighbours stop by to warm themselves by the fire and friends inevitably end up in the kitchen, surrounding the big island while Dave cooks and Susan sets everyone at ease. “I love having people over because my purpose in life is to take care of people. This house and this space allow me to do that. It allows us to do it often.” 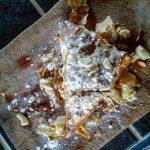 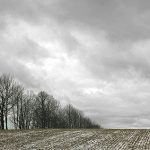