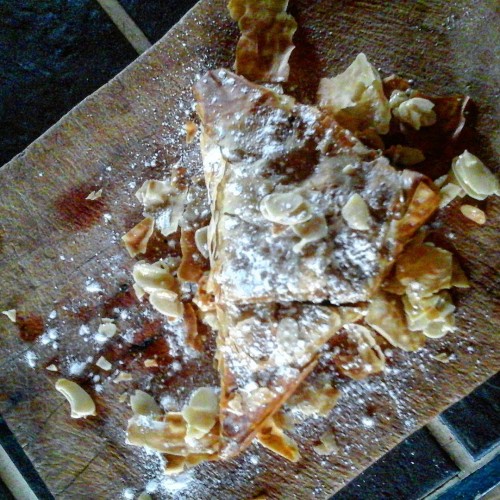 Have you ever been intrigued by a certain recipe but were afraid to try it, maybe because it involved a seemingly strange combination of sweet and savoury that you thought might not work for your taste buds? I repeatedly was drawn to recipes for a Moroccan pigeon pie, garnished with almonds and powdered sugar, in various cookbooks, but they all seemed risky: a lot of work for something I wasn’t certain I would like.

So it was with great excitement that I realized that my friend Aimée was making this dish, also known as B’Stilla, for a dinner she had invited us to. And of course I found that it was incredibly delicious and exotic in the best possible way. I had really wasted a lot of time. I made up for that by adapting a simple recipe in Bonnie Stern’s excellent cookbook Friday Night Dinners, that uses chicken instead of pigeon, and serving it countless times to happy customers when I was at The Union Street Café. Her recipe cleverly rolls the filling into phyllo cigar appetizers, but I fold it into large triangles as an entrée.

Bonnie’s recipe starts with raw chicken, but I always make it with roasted free-range chicken that has been pulled from the bones and chopped, with a mix of dark and white meat.

Heat oil in a large skillet over medium heat. Add onion and cook until tender and beginning to brown. Stir in garlic, cumin, coriander, paprika, cinnamon and salt and cook another few seconds, until fragrant. Stir in chicken, egg, honey, and hot sauce. Taste and add black pepper and a little more salt if needed. Set aside to cool a little.

Preheat the oven to 350°. Unwrap the phyllo and unroll so the short side is towards you. Remove one sheet, brush with butter, and top with a second sheet. Brush this with butter and top with a third sheet. This time you only need to butter the top half of the sheet. With a sharp knife, cut the stack vertically in half. In the bottom right hand corner of each rectangle, place about 1/2 cup of the filling. Fold like an American flag, starting at the bottom, into a compact triangle. Brush with butter and place on a baking sheet. Repeat with remaining filling and phyllo. Bake for 25 minutes, possibly a little longer, until the pastry is golden brown.

Meanwhile, heat the two tablespoons of butter in a small pan over medium heat until melted. Add the sliced almonds. Stir often as the almonds toast a little and the butter browns. Remove from the heat. When the pastries are baked, arrange them on a serving platter. Spoon the almonds and butter over top and sprinkle with the powdered sugar 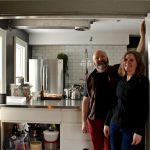