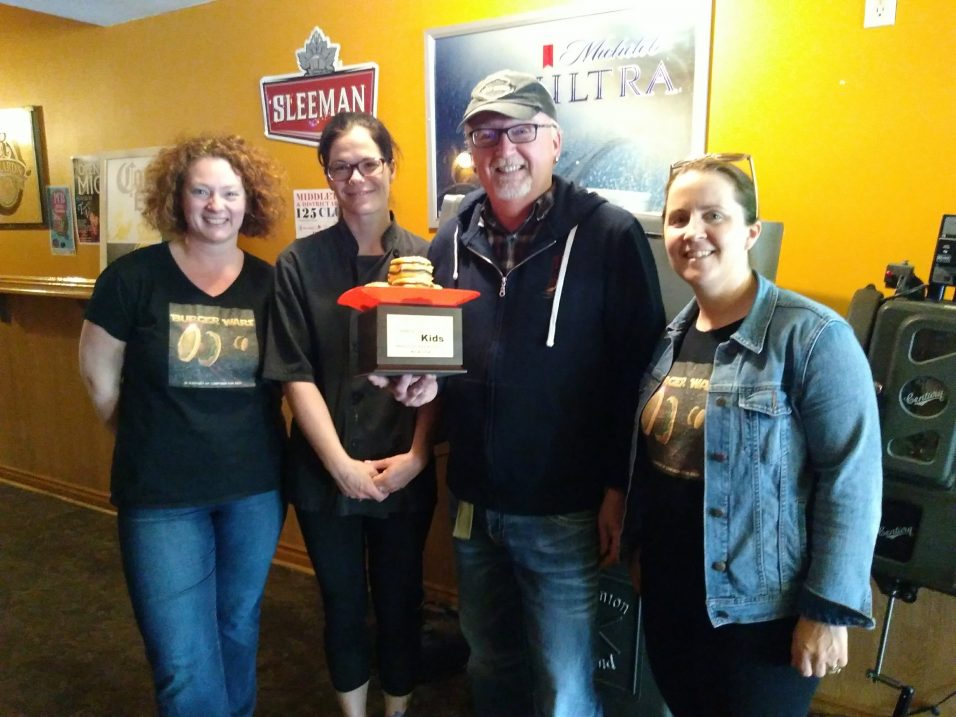 A huge thank you to everyone who participated in Burger Wars for Campaign for Kids: Episode III!

Burger Wars keeps getting bigger and better, and this year is no different. This year, 44 restaurants from Digby to Windsor were involved, each donating $1 to Campaign for Kids for each specialty burger sold. The numbers are in, and this year, 12,330 burgers were sold in the Annapolis Valley! This is up from the 8800 from last year and 5500 in the first year. With the rounding of donations, doubling of others and matching by other organizations, the grand total is well over $13,000! This money will be used for bursaries for students and funnelled into the schools to purchase things like sneakers and louse kits, and to pay for program fees and emergency food. This winter we will be providing winter coats and boots to students in every school in Kings County.

The People’s Choice Award for the Most Outstanding Burger went to the Capitol Pub for their Double Down burger. Chef Michelle from the Capitol Pub also won a barbecue set and kitchen-grade knife from JR Mahoneys, restaurant supplier in Sydney. The runner-up was Troy in Wolfville for their lamb burger. Both restaurants will continue to feature their winning burgers on their regular menus.

New this year, Campaign for Kids had a passport. For every 5 restaurants that were visited, a ballot was given. Peter Rand of Port Williams won a $400 gift certificate to the Quarterdeck on the South Shore for filling out his passport.

Thank you to all of our participating restaurants, sponsors such a KRock and Waterbury Newton Law Firm, and our burger eaters. In our minds, you are all winners, but no one wins more than the kids in Kings County.

To learn more about Campaign for Kids, visit CampaignforKids.com.