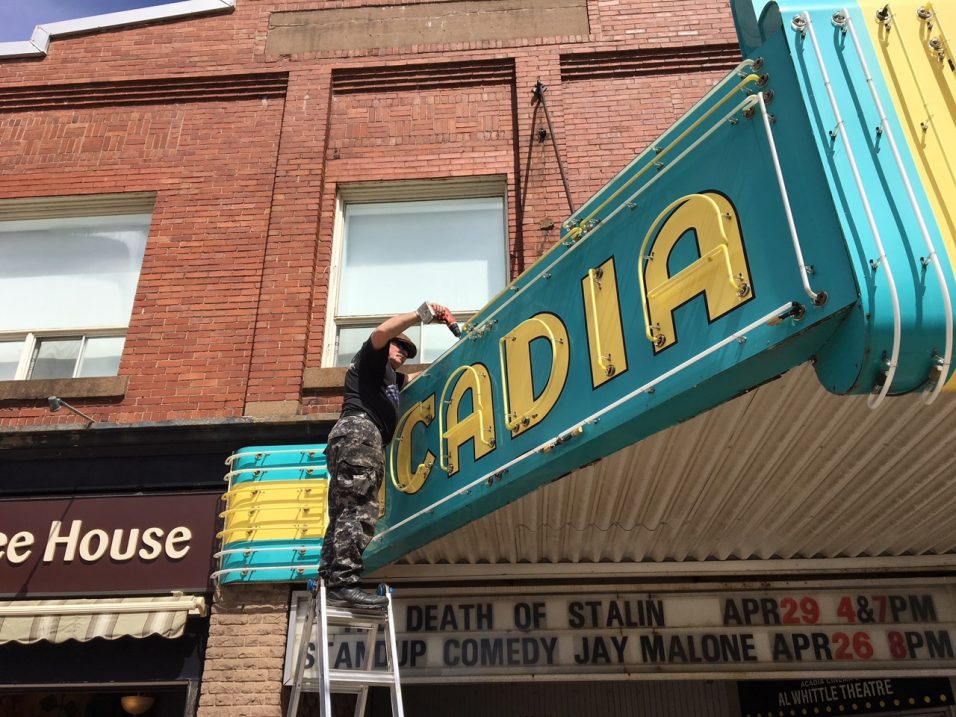 Damage to the Iconic Acadia Cinema Marquee
By Wendy Elliott

Vandals have struck the neon tubing on the iconic Acadia Cinema marquee in Wolfville nine times since 2012.

The latest damage took place on a Sunday evening in February while a movie was being screened inside. The Wolfville Volunteer Fire Department were concerned about fire since the broken tubes were causing electrical arcing.

Vandals, who likely jump up and yank at the tubes, have caused the non-profit cinema co-operative nearly $5,000 in unnecessary repairs. Chris Siefert, who is one of the last artisans in Nova Scotia who can repair neon signage, calls the cinema marquee the icon of a dying art form. It may be the last of its kind in Nova Scotia. Certainly, Siefert says, the neon signs at the Oxford and Capitol Theatres in Halifax are gone. “I don’t know of any other marquees,” he says.

There is no doubt in his mind the damage is caused deliberately by vandals passing by. “For the tubes to be broken, they definitely have to be hit with something,” he said. “Either they’ve been batted at or someone has reached up and grabbed them.” Siefert adds, “that aggravates me. Some people say ‘oh it’s good for your business.’ But that’s not the way it should be. It’s a beautiful sign and the cinema is a heritage building now.”

The ‘Acadia’ neon marquee was installed in 1947 and quickly became an icon for Wolfville and today is a local landmark. “It’s a piece of history,” Siefert contends. “It’s seen so much.” Neon is not new technology and Siefert, with over 40 years under his belt, says he is one of the last repairmen in Nova Scotia – as is his colleague who is a tube bender. “The others got old. They retired or passed away and no one wanted to take it up.”

Contemplating the damage, Siefert notes, “you could say boys will be boys. But they don’t think about the ramifications. That marquee is going the way of the dinosaur. I wish they would understand that what they’re destroying eventually won’t be able to be replaced. It’s harder to get supplies and the suppliers are farther afield.”

Siefert, who comes up from the South Shore to make repairs, tries to keep repair costs down for the cinema coop. “I’ll try and keep it there a while long. I don’t want it to disappear on my watch.”

Cinema manager Mary Harwell says the board is “getting a quote to see if we could install a plexigass cover over the front stripes…in hopes of making it harder to reach up and whack the lowest tubes.”

Many area residents will recall that the cinema closed in 2000 and was dark for almost five years. A ceremony took place when the marquee was relit and Bill Zimmerman made a big prop switch outside on the sidewalk, which Mayor Bob Stead pulled to “relight the marquee”.

The theatre building goes back in 1911. The brick façade was extensively renovated last year after the provincial heritage designation was approved. The marquee is listed as one of cinema’s character defining elements. 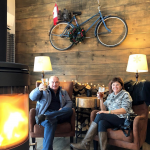