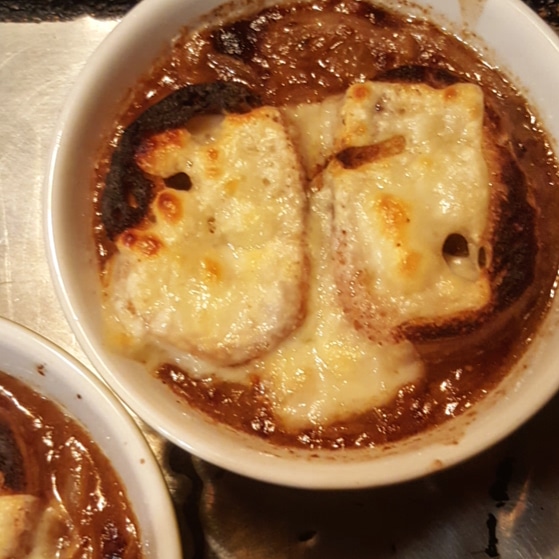 It had been way too long since I’d tasted French onion soup. I don’t think I have ever even made this for my family, although I’ve cooked cauldrons full of it at the restaurant, where our recipe included a complicated vegetable stock involving mushrooms, sun-dried tomatoes, and soy. I wanted to make it way way way simpler and still swoony.

I first tried making this with homemade chicken stock, since that’s what I had, and it was great, but afterwards I wondered if I could get away with just using water, and guess what? With so much flavour going on here, stock is just unnecessary. It’s as luxe and delicious as you remember, and it’s good to know you can make a satisfying dinner with a little stale bread, some onions and a chunk of cheese.

After I happily tested a couple of batches of this, I was suddenly inspired by Ruth Reichl’s pumpkin fondue (cubes of bread and cheese baked inside a pumpkin). The buttercup squash and cheddar variation was born. It’s really really good.

If making the buttercup squash and cheddar variation:

In a large, heavy pot, melt the butter with the olive oil over high heat. Add the onions and stir for a few minutes to get them going, then turn down the heat and cover. Cook on low heat, stirring occasionally, for about 20 minutes, until onions have softened. Add the garlic and continue to cook, uncovered, for another 25 minutes or so, until gently browned and starting to stick.

Add the Dijon mustard, soy sauce, water, and wine or vinegar. Bring to a boil, then reduce the heat and simmer for a few minutes. Add pepper to taste and check to see if it needs a little more salt. The soup can be made up to this point and refrigerated for a few days.

When ready to serve, heat the broiler. Heat the soup, if necessary, and divide between bowls. Top with a slice or two of baguette, and sprinkle with cheese. Broil until the cheese melts and browns a bit.

For the buttercup squash and cheddar variation, heat a heavy pan over medium heat and add the oil and squash. Sprinkle with a little salt and cover. Cook for ten minutes or so, stirring occasionally, until tender. Add to the soup. Divide between bowls as above, add toasted baguette slices and sprinkle with cheddar. Broil until browned. 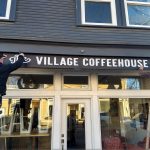