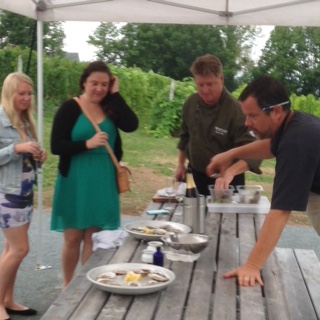 Next to Christmas… and maybe Thanksgiving… my favourite holiday is The Devour Food Film Festival. This November the sights and smells of amazing movies and delicious dinners will fill the streets of Wolfville as The Devour Food and Film Festival hits the town.
Last Friday night I had the pleasure of participating in one of the first Devour Food Film Festival events of the season – a taste of things to come so to speak. A small group of Film Foodies gathered at Restaurant Le Caveau for an evening of short food films and delicious food paired with tantalizing wines. Chefs Michael Howell and Jason Lynch created the mouth-watering dinner for the evening, Beatrice Stutz (Le Caveau manager) expertly paired the wines, and Lia Rinaldo curated the short food films that we enjoyed with each course of dinner. But I’m getting ahead of myself. Let me tell you about how the evening began.
Hanspeter Stutz – owner of Domaine de Grand Pré Winery – greeted us in the courtyard and delivered a very engaging talk about the history of Domaine de Grand Pré and, indeed, the local wine industry in general. Then he took us for a tour of the vines and delivered us to a tent set up in the centre of the vineyard. There, Chefs Jason Lynch and Michael Howell were waiting for us with a buffet of succulent French Cabot and St. Simone oysters. This was a great surprise and a fresh treat with which to start off. Our oysters were accompanied by a glass of Champlain – Grand Pré’s sparkling wine white. From there we made our way to the pergola of Le Caveau where we were greeted by restaurant manager, Beatrice Stutz and a few of her attentive and courteous servers and two beautifully set tables.
We embarked on our three-course dinner (plus dessert) with a first course of Chanterelles en Croustade, sea asparagus, cold pressed canola oil, and Urban Blue cheese. Before eating, Lia Rinaldo introduced *Cooking Up a Storm* – directed by Tom Wilson. Both the short film and the first course were paired perfectly by Beatrice with a glass of Vintner’s Reserve Ortega. This fresh, white wine was a perfect companion to the Chanterelles and blue cheese. Delicious!
Next up was Cavatelli with lobster, Pattipan squash, and olive oil roasted Sun Gold tomatoes with shaved Parmigiana and a Frico chip. This course was prefaced with the delightful film, Pasta Fatto a Mano directed by Antonio Diaz. Beatrice worked her magic with the fantastic Grand Pré Rosé that worked beautifully to enliven the rich lobster.
Our third course was Salt Crusted Nova Scotia leg of lamb, Farro, Mustard Greens, Dijon, and Porcini. This course began with the short film, Le Petit Chef – directed by Antoon Verbeech and Filip Sterckx. This may have been my favourite film of the evening with a clever and enchanting use of creativity and technology. I’m not going to say any more in case you have a chance to see it somewhere soon. A luscious glass of Tribute accompanied this course and worked perfectly alongside the lamb. This course was a little voyage of rich, deep tastes with an equally rich wine.
Dessert was not about to be outdone by its predecessors. We were presented with a film named (ironically) Loss of Taste directed by Luca Nestola. I say “ironically” because the dessert that followed the film had not lost any taste… at all. Panna Cotta de Mandoria con Sciroppa di Vino Rosso. For those of you whose Italian is a little rusty, that means “almond milk panna cotta with red wine syrup”). I’m usually a purist when it comes to my panna cotta but I think this almond milk version may have made a convert of me. Absolutely delicious and perfectly paired with a Dolce Vita dessert wine.
We wrapped up the evening with a viewing of Cheese, directed by Hannah Cheeseman (true story – that’s her name), accompanied with a plate of Taliah – a clothbound cheddar from Quebec – and some honey. This was all served with the sweet Grand Pré 44 White Port – a personal favourite for sure.

As enticing as this evening was, it was merely a hint of the incredible culinary and cinematic magic that is going to unfold in Wolfville this November at Devour the Food Film Festival. Keep an eye out for tickets to films and dinners and exciting workshops as they become available soon (devourfest.com). Cheers. 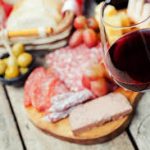